There are chances for rain and possibly some scattered storms this week, followed by a nice weekend.

(FOX 9) - There are a few opportunities for rain and possibly some scattered storms this week, followed by a nice weekend with temperatures in the 70s.

After some dense fog Monday morning, clouds will continue to thicken for a mostly cloudy day to start the work week. The high is 78 degrees in the Twin Cities, with temperatures in the upper 70s for much of the state, which is a little below average for this time of year. It'll be much cooler in northeastern Minnesota, with the temperature in Grand Marais expected to top out at 59 degrees.

Monday's forecast: Cloudy with highs in the upper 70s

More of the same tomorrow.

Tuesday will be warmer with more sun, though it'll patchy. A high of 80 degrees is expected in the Twin Cities, with upper 70s expected for much of Minnesota, except the Arrowhead, which will be cooler.

There will be chances for popcorn showers and pop-up thunderstorms on Tuesday, especially in northern Minnesota. Storms will be hit-and-miss and have very little impact as the day progresses.

There's a slightly better chance for storms on Wednesday, which will be seasonable with a high around 81 degrees in the Twin Cities. Scattered storms are possible on Thursday, when the high will be around 80 degrees. Friday also looks a bit rainy, with a high of 76 degrees.

But the forecast suggests a nice weekend. Pleasant on Saturday with a high of 74 degrees and sunshine. More of the same on Sunday, when the high will be around 77 degrees. 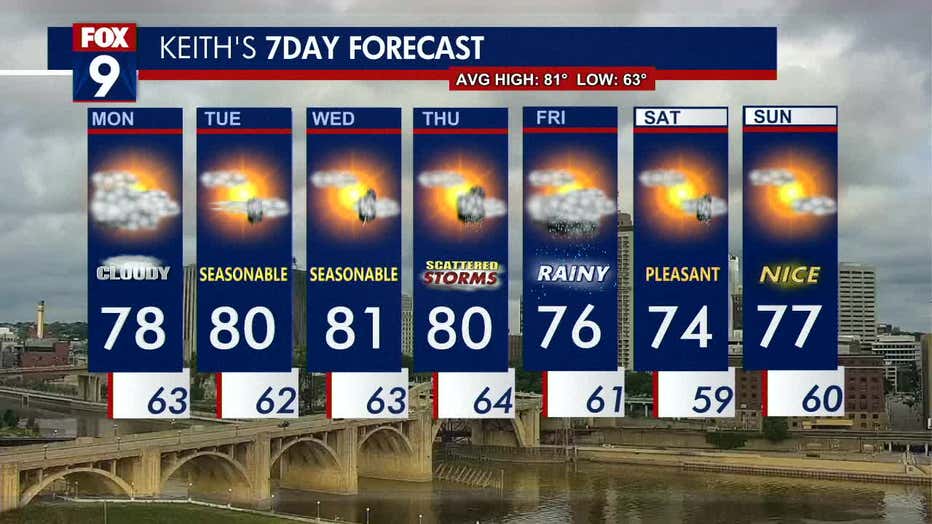 The forecast for the week.