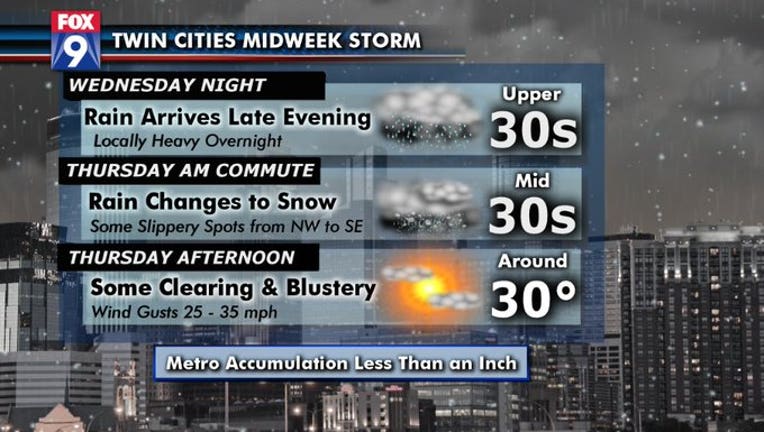 (FOX 9) - While we finally saw a little sunshine in the Twin Cities Wednesday, our next storm is pushing into the Upper Midwest and will likely give many of us some rain with a dash of snow.

For the Twin Cities, this storm will mostly be a rainmaker. But, that rain will eventually change over to snow as the precipitation winds down. This changeover will be less about overall snow accumulation and more about how ill-timed it will likely be.

Pockets of drizzle and mist will likely develop around central and southern Minnesota, including the Twin Cities, late Wednesday evening sometime after the evening rush. This drizzle will eventually lead to widespread light to moderate rain overnight with a quarter to a half inch of water expected. For early risers and early commuters, it will be a rain event. However, colder air will be arriving toward sunrise (7 a.m. or so) which will begin the transition from rain to wet, slushy snow from northwest to southeast during the morning commute.

The snow won’t last all that long, with many locations not receiving more than an inch. But, the timing could be very problematic as it will likely happen during the heart of the morning commute. 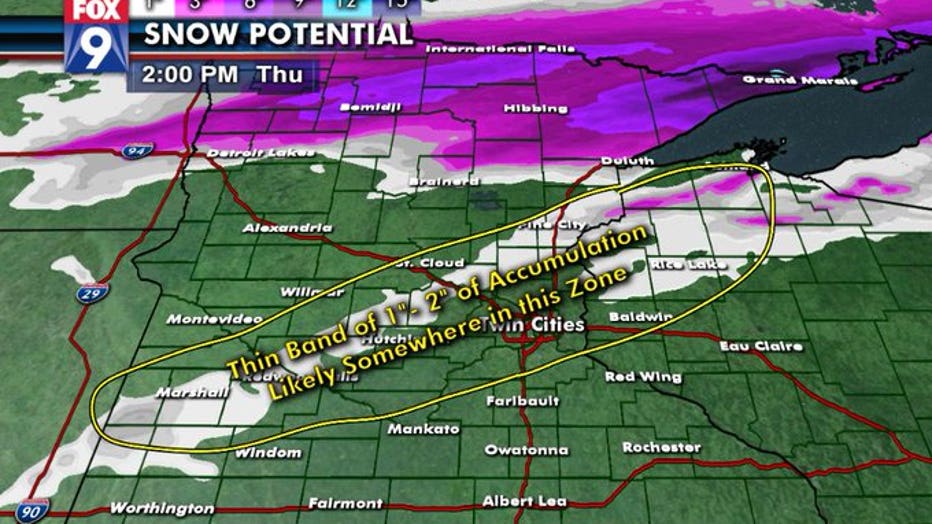 The bulk of the overall snow accumulation statewide will stay across the northern quarter of the state. With most locations around the Twin Cities coming in under an inch. That said, there will likely be a thin band located somewhere from southwest Minnesota, through eastern Minnesota and western Wisconsin that will house the potential for up to 2 inches of slushy accumulation.

The snow will wind down quickly toward midday and then it’s just going to be cold and blustery with temperatures likely falling below freezing during the afternoon, leading to slippery spots for any roadways that haven’t dried up yet, mostly side roads and parking lots. An approximate timing of the changeover is in futurecast in the still images below. 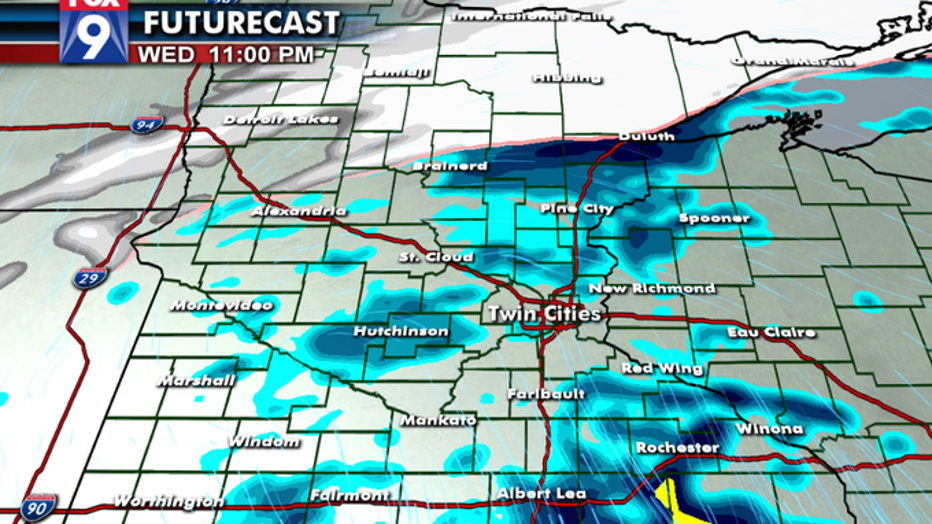 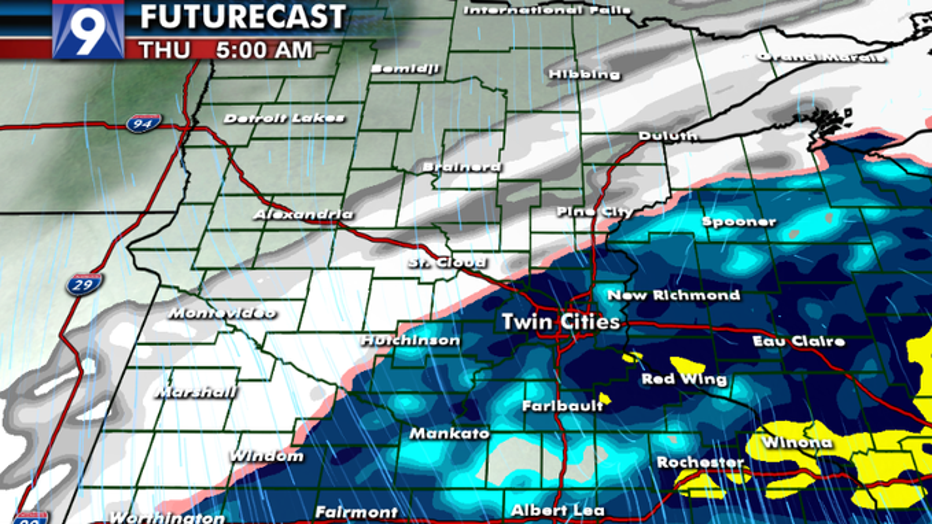 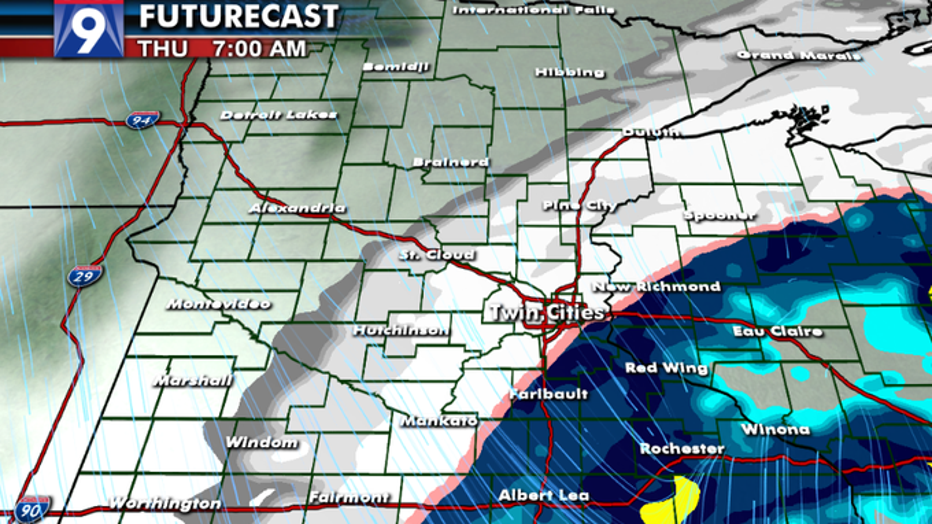 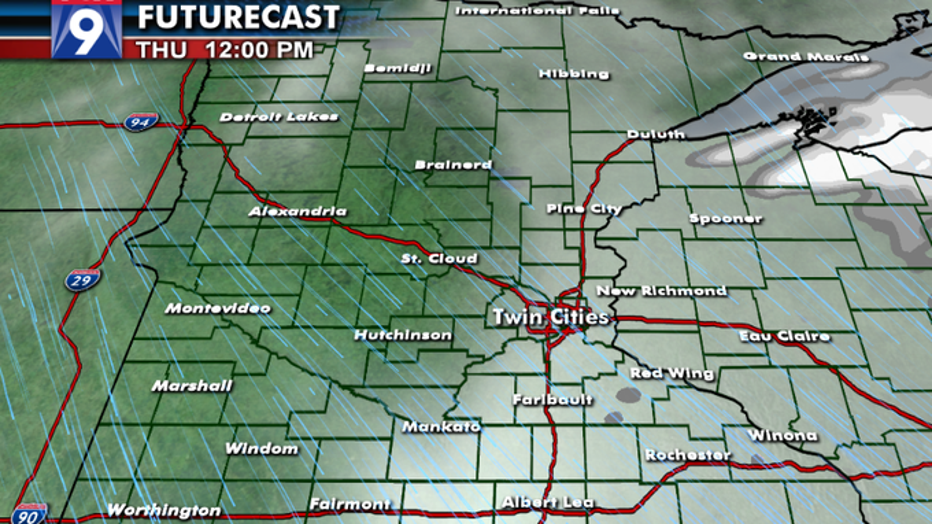