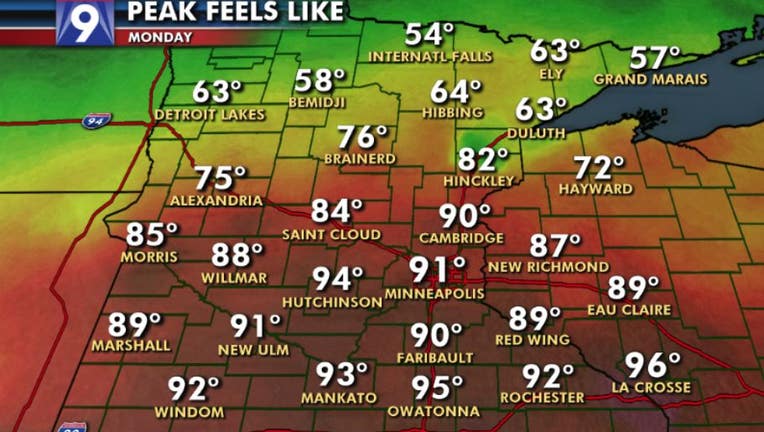 It may have been expected for days, but it doesn’t make it anymore eye popping. While some loved the one-day return to summer, others despised it. Everyone though I think can agree that it has been a crazy weird couple of days.

Temperatures were in the 50s most of the day on Sunday, but our slow climb in those numbers continued overnight and right through Monday as warm and tropical air surged northward out ahead of our next spinning area of low pressure. But that warmer air didn’t make it to everyone in the state as northern Minnesota topped out in the 50s in spots. Combine our temps with the added moisture in the atmosphere, and it felt close to 100° in a couple of areas, including Lakeville.

The official afternoon peak heat index hit 91° at MSP Airport thanks to the dewpoint surging to 72°. This was the highest dew point ever recorded this late in the year, according to the National Weather Service and the Minnesota Department of Natural Resources.

At the same time, temperatures were in the upper 40s in northwestern corner of the state which means the state had a nearly 50° feels like swing during at least part of Monday. Here’s what the warm air looked like surging northward in the Upper Midwest.

Looks like our much cooler pattern will be hanging around a while with plenty of 50s in that 7-day forecast. While the overall probability of more warm days (temps generally above room temperature) is getting increasingly smaller, it doesn’t mean they’re done altogether. In fact, we have seen highs in the 70s well into November.