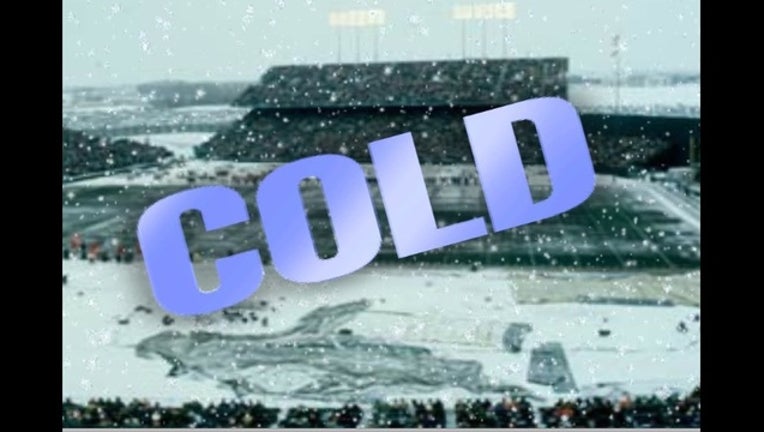 KMSP, Minneapolis - The single digits, above or below zero, will be quite popular during Sunday’s game at TCF Bank Stadium. Numbers that low are not only uncomfortable, but dangerous and they can even affect the outcome of the game. Leave it to this nerdy meteorologist to link this game’s outcome to the weather.

It’s a scientific fact that air pressure decreases when the temperature decreases. This is especially noticeable in hollow core footballs as opposed to solid core baseballs. In fact, footballs left out in single digit temperatures for an hour saw air pressure decrease by as much as 20 percent. This lowers the football’s coefficient of restitution, in other words, the ball doesn’t bounce as much and can come off a kicker’s foot a bit slower. Also, the footballs shrink a bit, making them slightly smaller in such cold conditions.

They don’t call it shivering cold for nothing. Shivering is a way the body tries to protect itself, by shaking and generating heat. Another way the body goes into defense mode is by reducing blood flow to the extremities, aka the hands and feet. This can reduce grip strength by as much as 50 percent. While the body is fumbling around with your hands, it’s also burning extra glucose to keep its core warm. The depletion of this quick energy source can reduce reaction time by 45 percent. So, in a way, you're more likely to fumble, and less likely to grip, a not so bouncy football during Sunday’s game.

According to statistics, between wind, precipitation and cold, the cold has the biggest influence on the outcome of a football game. The average win percentage of the visiting team is roughly 43 percent. However, when mild climate teams play cold climate teams in the great outdoors, that winning percentage drops to 35 percent. The bone chilling cold also increases drops and decreases pass completions.