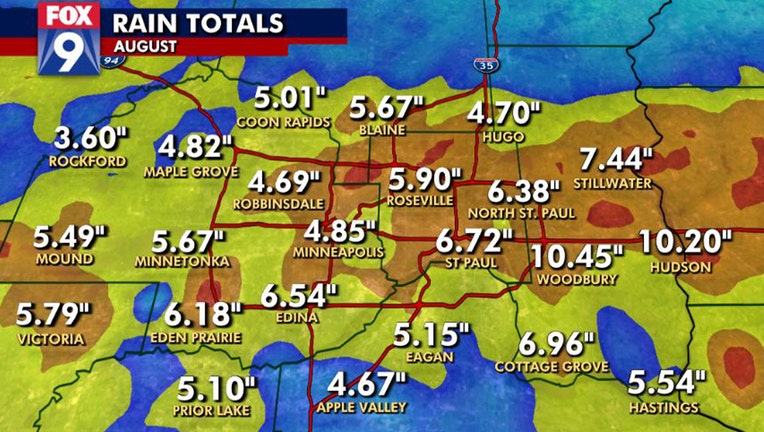 (FOX 9) - A very wet week in the Twin Cities and many parts of the state has turned our summer around in the eleventh hour. In fact, it is now officially one of the top ten wettest Augusts on record at Minneapolis-St. Paul International Airport. While I don't mean to rain on anyone's parade, pun intended, we are a LONG way from ending our drought.

There are certainly parts of the Twin Cities that have seen a tremendous amount of rain in the month of August. Nearly 7 inches at MSP Airport and more than 10 inches in parts of the east metro like Woodbury and Hudson, Wisconsin.

But. other sectors of the metro have seen far less with a pretty average amount in portions of both the south and north metro. Places like Burnsville, Apple Valley, Maple Grove, Brooklyn Park and even parts of Minneapolis received less than 5 inches over the month. Still above average, but not the copious amounts that other locations have experienced.

This "feast or famine" theme is very common for summer-time storms as the heaviest of the rain can be very spotty. And unfortunately, parts of the metro were far more fortunate this month than many other parts of the state, especially northern Minnesota. Much of the forested regions in the northeast corner of the state have seen less than 2 inches for the month, with a lot of that coming in the last few days. 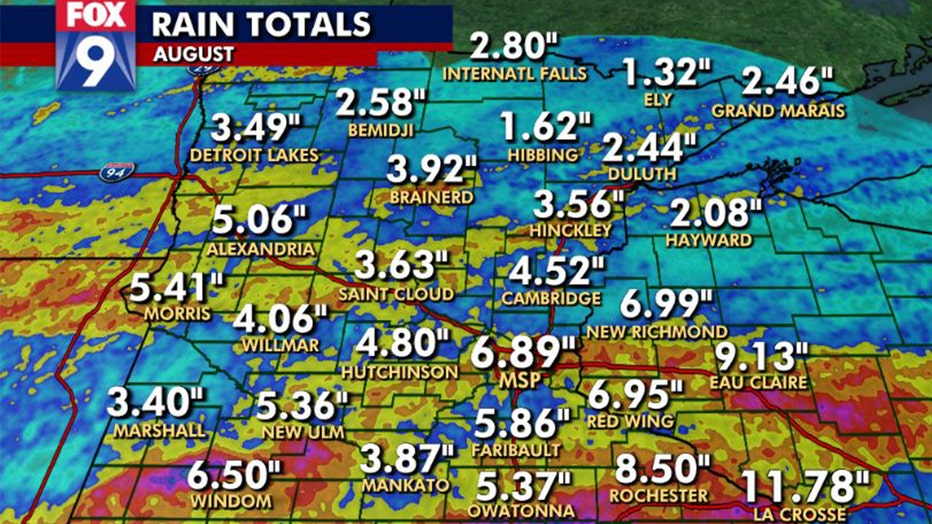 Thankfully our wet week will provide some drought relief and prevent conditions from getting worse for the time being, but it doesn't solve the issue. There are many layers to drought that can't be solved with one wet week. While creeks, streams, rivers and lakes see at least some rise in levels, the soil takes MUCH longer to rebound. It takes a while for water to soak into the ground when it rains. Long enough that when we get heavy downpours, only a small percentage of that rain actually soaks in.

Think of it like watering a large pot of flowers: you start pouring the water into the pot and it doesn't instantly start draining out the bottom. It takes time. The drier the soil is, the longer it can take for that water to soak all the way to the bottom and begin flowing out of the pot. Well, unlike the pot, when it's done raining the water doesn't have the luxury of sitting in the pot and waiting to soak in, it just runs away into waterways.

WHY DOESN'T A DROUGHT GO AWAY WHEN IT RAINS? Your questions answered

So how much actually soaks in? That varies depending on the soil type, location, as well as how heavy the rain is falling. In most cases in Minnesota, you can get a 1/10 or 2/10 of an inch to soak in per hour. That's right, it's not all that much in short periods. So, if you get 2 inches of rain in an hour that's great, but only 10% of that or so will actually soak into the soil. There will be some locations that can get higher infiltration, like valleys and low-lying spots where it takes water longer to run off.

The rain over the last week has been great and certainly a step in the right direction, but a lot more is needed over the next few weeks and months before we can put this drought behind us.