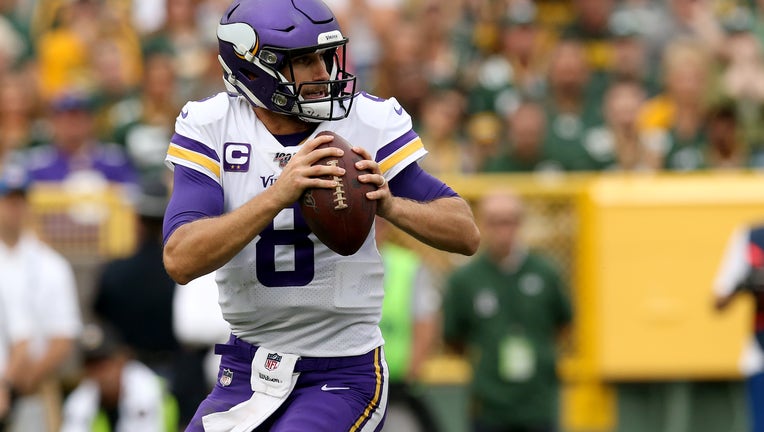 Quarterback Kirk Cousins #8 of the Minnesota Vikings throws a pass against the Green Bay Packers in the game at Lambeau Field on September 15, 2019 in Green Bay, Wisconsin. (Photo by Dylan Buell/Getty Images)

EAGAN - Kirk Cousins made it very clear Wednesday he won’t make the same mistake again with a winnable road game against a division rival on the line.

Cousins was trying to hit Stefon Diggs for a go-ahead touchdown with about five minutes remaining at Lambeau Field last Sunday. The pass was intercepted by Kevin King, essentially sealing a 21-16 win for the Packers. The play came after the Vikings had fought back from an early 21-0 deficit.

“You just can’t do that,” Cousins said repeatedly to reporters after the game.

He offered a similar response on Wednesday before the Vikings started practice to prepare for the Oakland Raiders on Sunday at U.S. Bank Stadium. The Vikings had 1st-and-goal from the 8-yard line, and had seven carries for 48 yards between Alexander Mattison and Dalvin Cook on the drive before the interception.

Mike Zimmer wants his $84 million quarterback to “play within himself” and throw the ball away if the play isn’t there. They said all the right things on Wednesday, but it’s in between the lines on Sunday afternoons that matters.

It’s been a weird two games for Cousins so far. In a Week 1 win over the Atlanta Falcons, Cousins completed just eight passes for 98 yards, one touchdown and a 140.8 rating. Last week, he was 14-of-32 for 230 yards and a 52.9 rating, one of the lowest in his career as a starter. He was also intercepted twice, and fumbled twice.

Last year, Cousins threw for more than 4,300 yards and 30 touchdowns. It only translated to eight wins, and the Vikings missed the NFC Playoffs.

Zimmer expects his quarterback to bounce back against the Raiders, who are ranked dead last in passing defense in the NFL, allowing 341 yards per game through two weeks, and five touchdowns.

Cousins, as most leaders of an NFL offense are apt to do, put the blame squarely on himself for the loss to the Packers. In addition to the interceptions and fumbles, he missed Diggs open down field for what would’ve been a long completion, and didn’t connect with Adam Thielen for a potential long touchdown.

His first interception was also a forced through to Diggs in heavy coverage. He had Kyle Rudolph open on the play at the first-down marker.

He was on the money on a 49-yard touchdown to Diggs in the second quarter, but Cousins admitted after the game his play wasn’t good enough.

Cousins was his own harshest critic in the locker room on Wednesday, even after hearing Zimmer still has confidence in him.

“It’s nice to be believed in, you’ve gotta go out and earn it though. In this league, no-one is giving you anything. This isn’t a charity, you’ve got to play well to earn people’s confidence,” Cousins said. “Believe me, I’m not going to be playing quarterback here if I played the way I did this past Sunday, for much longer. I understand that and I look forward to getting out there and playing at a much higher level.”

In the offseason, Cousins labeled himself a .500 quarterback. From a numbers standpoint, he’s right. In 18 games as a Vikings starter, he’s 9-8-1.

Diggs said Wednesday it’s not all on Cousins, nor should it be.

“He’s our leader, he’s the guy that’s leading this team. But at the end of the day, it’s not all his fault. Everybody is included, everybody can play better, everybody can do things better,” said Diggs, whose only catch in Sunday’s loss was the 49-yard touchdown. “We had a chance to win the game, we didn’t do enough to get it done as a unit.”

That said, Cousins knows what to expect when the Vikings lose and he doesn’t play well. He’s prepared to shoulder the blame, it comes with the territory of being a big-money quarterback in the NFL.

He’s ultimately judged, like any NFL head coach or franchise, on wins and losses.

“When you’re a quarterback in the NFL, you’re going to be evaluated, critiqued. If you’re not playing at a high level, if you’re not winning, all the more so you invite that on yourself,” Cousins said. “I just look forward to the challenge of playing better than I did this past Sunday and I look forward to that opportunity this coming Sunday to play at a much higher level.”