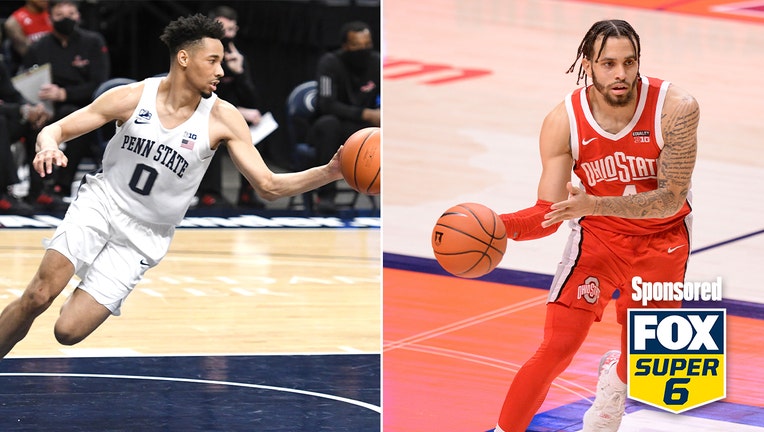 LEFT: Myreon Jones #0 of the Penn State Nittany Lions dribbles the ball during a college basketball game against the against the Rutgers Scarlet Knights on January 21, 2021 at the Bryce Jordan Center in University Park, Pennsylvania. (Photo by Mitche

The grueling nature of the Big Ten season has one guarantee – there are no easy games on the schedule.

For No. 13 Ohio State, they have been able to tapdance to a Top 15 status even with the rigors of  the conference schedule. And as the season turns into the second half of conference play, the Buckeyes tests are only going to get tougher.

One of those sneaky trouble teams could be Penn State, who is 5-6 through a COVID-19 plagued early schedule and who arrive at Value City Arena in Columbus on Wednesday night (7 p.m., BTN) in need of some momentum to keep their NCAA Tournament hopes alive.

Who will win the game?
Penn State or Ohio State
The Nittany Lions are the team with the air of desperation with back-to-back games against No. 10 Wisconsin coming up in the next week and four other games against ranked opponents still ahead. But Ohio State has the best player on the floor in Washington, a deeper bench and a better defensive system. That could be the difference in this one.