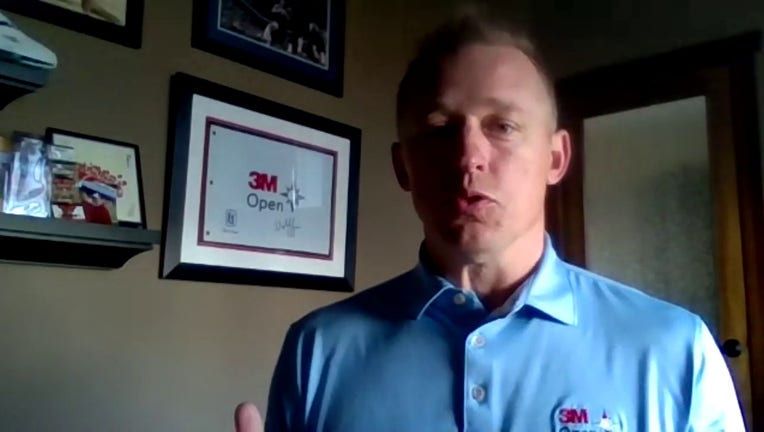 3M Open Tournament Director Mike Welch said Friday officials will know by the end of May if fans will be able to come to TPC Twin Cities.

MINNEAPOLIS - Officials with the 3M Open will know within the next seven to 14 days if the tournament, now in its second year, will be open to fans as concerns remain during the Coronavirus pandemic.

The PGA Tour canceled all tournaments from March 12 through the end of May as Covid-19 shut down the sports world. The tour decided to resume play, starting June 11, with its first four tournaments not having any fans on the course. The plan, if it holds, will be for the John Deere Classic July 9-12 to be the first PGA Tour event open to spectators.

The tour will descend on TPC Twin Cities in Blaine two weeks later, July 23-26. Speaking via Zoom Friday morning, 3M Open Tournament Director Mike Welch is hoping to allow between 5,500 to 6,500 fans per day on the course, reducing fan attendance in the interest of public safety due to the Covid-19 pandemic. That's the top priority, safety for all involved on the now annual PGA Tour stop in Minnesota.

Crowds by the thousands flooded Blaine last year for the inaugural 3M Open over the Fourth of July week.

“Our biggest focus, undoubtedly, is the safety of everyone that’s coming into this tournament. We always want to make sure that we have a great field and a great atmosphere and a really fun time for the folks that come to the 3M Open,” Welch said. “In this environment and what we’ve been dealing with over the last two-plus months, the last thing that we want is for somebody to come to the 3M Open and not feel safe. Safety is paramount for what we’re doing here.”

3M Open officials are working in regular contact with the office of Gov. Tim Walz. Welch said a decision on fans needs to be made by the end of May so that the tournament’s building partner, based out of Houston, can make its way to Blaine to start building tents and other structures in the weeks leading up to the tournament.

Under the advisement of medical professionals, the PGA Tour is under strict guidelines once play resumes to make tournaments safe for everyone involved. Players and caddies will travel directly from tournaments to a hotel, their temperatures will be taken before entering the golf course and they’ll head straight back to the hotel after play or practice concludes.

3M Open officials will make hand sanitizer stations available throughout the course, and have signs promoting social distancing. Vendors and food and beverage providers will be taking every safety measure possible under state and local guidelines. If a player, caddie or tournament official shows symptoms of Covid-19, they’ll be monitored at a “safe room” or staging area and not allowed on the grounds.

Everyone affiliated inside the ropes of the tournament will be asked to stay in a bubble to remain safe.

“We will not compromise safety protocols just for the sake of convenience,” Welch said.

As for the field, 3M officials are hoping it matches, if not exceeds last year’s. The 2019 field included five of the top 30 players in the world, including Brooks Koepka, the No. 1-ranked player at the time.

This year, the tournament got pushed back two weeks to July 23-26. It’s the week after Jack Nicklaus’s tournament, The Memorial, and is followed by the WGC FedEx St. Jude Classic, two of the more popular events on tour. The PGA Championship is in the first weekend of August, so the 3M Open could serve as an early tune-up for many players getting ready for the first major tournament.

3M officials have been in contact with each player in the top 25 of the World Golf Rankings. Welch said player commitments won’t be announced until they know if they can have fans.

“Being two tournaments before the FedEx Cup Playoffs start, we feel really good about what the field is going to be. When the fans here in Minnesota see who’s coming, they will certainly want to be at this tournament,” Welch said.

In addition to capping the tournament at around 6,500 fans per day, the 3M Open is seeking about 2,0000 volunteers to help run the event.

3M officials want a competitive golf tournament and they want fans on the course. But safety for everyone remains the No. 1 goal.

“It’s what Minnesotans do in the summer, they get outside and they enjoy what Minnesota offers. With that responsibility comes a lot of things that we want to ensure that when any spectator, volunteer, certainly any player, caddie or tournament official comes to the 3M Open, that they will be ensured that it is the ultimate safe event,” Welch said.