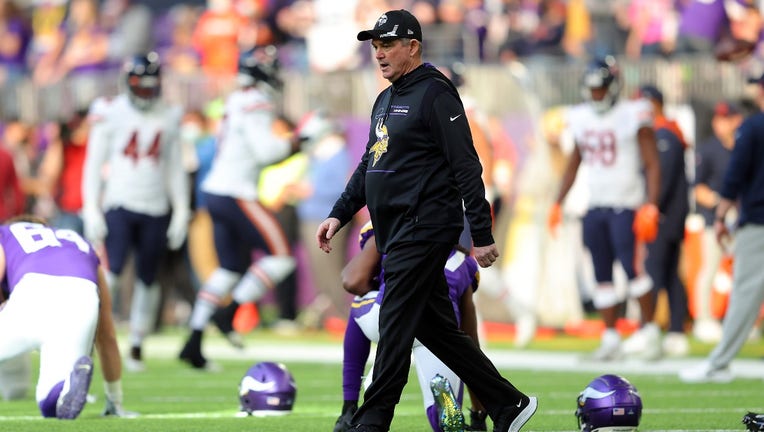 Head coach Mike Zimmer of the Minnesota Vikings walks the field during warm ups prior to the game against the Chicago Bears at U.S. Bank Stadium on January 09, 2022 in Minneapolis, Minnesota.  ((Photo by Adam Bettcher/Getty Images))

MINNEAPOLIS - The Minnesota Vikings host the Chicago Bears at noon Sunday at U.S. Bank Stadium to end the 2021-22 season, with speculation looming about Mike Zimmer’s future with the organization.

The Vikings were eliminated from NFC Playoff contention after last Sunday’s 37-10 loss at Green Bay. It’s the second straight season, and third in the last four years, that the Vikings will not make the playoffs under Zimmer.

Zimmer is 71-56-1 in eight seasons with Minnesota, but has just two playoff wins.

Despite Sunday’s game having no meaning for either team in terms of the regular season, Zimmer and players said earlier this week that all healthy and available starters will play. The inactives for Sunday’s game include Kellen Mond, Mackensie Alexander, Kris Boyd and Michael Pierce. That means the Vikings will be thin in the secondary, with Patrick Peterson and Cam Dantzler the starters.

With the game not having any playoff implications, U.S. Bank Stadium was at about 60 percent fan capacity at kickoff.

The biggest questions remaining around the team after Sunday’s game going into the 2022 season. revolve around the futures of Zimmer, general manager Rick Spielman and Cousins, who is due to make $45 million next season. Cousins said this week he wants to spend the rest of his career with the Vikings.