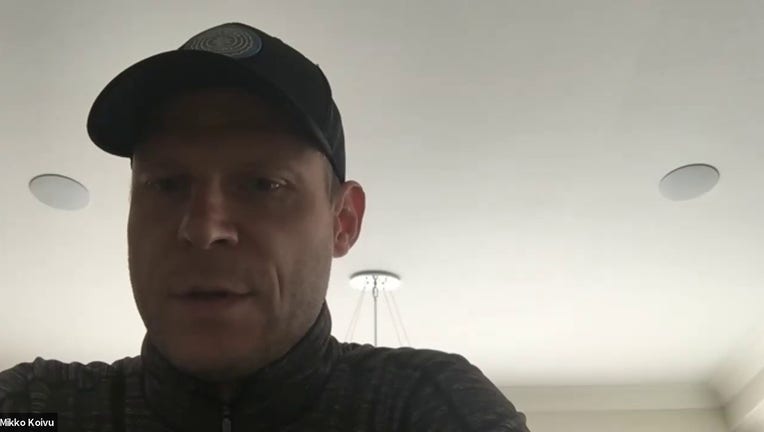 Mikko Koivu spoke with reporters via Zoom Wednesday about the Wild, the NHL and his future in hockey with sports shut down due to the Coronavirus pandemic.

MINNEAPOLIS - Mikko Koivu isn’t sure what his hockey future holds right now, and the Minnesota Wild captain and veteran isn’t ready to make any decisions until the NHL makes one about the hockey season.

Koivu spoke with reporters Wednesday morning via Zoom from his Twin Cities home. Like every other athlete and all of us, he’s taking things day-by-day with sports shut down due to the Coronavirus pandemic.

With the NHL season stalled, Wild captain Mikko Koivu shares his thoughts on the future.

The Wild veteran just turned 37, and it’s a birthday he’ll likely never forget. It was March 12, the day the NHL and NBA suspended their seasons due to the Covid-19 pandemic. His main focus now is staying on a routine, and he didn’t have an answer when asked if the NHL season was over.

“I don’t know to be honest with you. I think there’s days that you get more optimistic about it, you get more confidence that we will get back on the ice. Then there’s other days that you’re like it doesn’t seem that it’s going to happen,” Koivu said. “I think our information is what you guys have and at the moment, just trying to follow all over the world where it’s heading. I think there’s so many questions right now it’s impossible to give you an answer.”

Koivu had played in 55 games this season, scoring four goals and adding 17 assists for 21 points. He missed seven games with a lower body injury that caused him to miss a good chunk of December. It’s been an interesting year, one where fan-favorite Jason Zucker was traded and Bruce Boudreau was fired.

Yet after a 1-6 start, the Wild were right in the thick of a playoff chase with the regular season winding down. They were 7-3 in their last 10 games before play stopped.

“You look at how the season started for us and where we were after 10 or some games, the way we climbed back, the confidence we had. I think we were feeling really good about our chances to get in,” Koivu said. “Anything can happen once you get to the playoffs. If you’re healthy and can play the kind of hockey we did going into the playoffs, anything can happen.”

He’s staying in Minnesota during the Covid-19 pandemic, but often checks in with family and friends in Finland. He works out regularly and tries to maintain a sense of normalcy, when our daily lives are currently anything but normal.

At some point, Koivu will have to address his hockey future. He’s now 37 years old, in his 15th NHL season and in the final year of his current contract. Retiring could be in the cards after spending his entire career with the Wild. He won’t make any decisions until the NHL has finality on its season.

“I guess I’m more just waiting right now if the season is going to still be on or not. That’s where I’m more at, and I think with the future there’s so many options right now for me that I think trying to think about it all and think about what’s best for me going forward,” Koivu said. “I think as of right now I think like any other player, we’re more worried about the season as of right now and if we can continue the season or not.”

The NHL is exploring all possibilities to finish its season and have the playoffs. That’s pivotal for the Wild, who were one point out of a playoff spot with 13 regular season games left when the NHL shut down.

One option, if and when play can resume, was to go straight to the playoffs. That would mean the Wild’s season is over. Another is to play games in empty arenas. It’s hard to imagine playing the Stanley Cup Playoffs without fans in the seats.

“It would be very strange, there’s no question about it. Fans are a huge part of the game and I think that’s the biggest reason why you play the game, you get to be in front of the fans. That’s a huge, huge part,” Koivu said.

Koivu is considering many factors when it comes to his future in the game. He’s been with Minnesota his entire career, 709 points in 1,028 career games. If the NHL cancels its season, he could finish his career in his native Finland.

He just simply doesn’t know, doesn’t have an answer and is focused on staying in shape for when the NHL does make the call.

“When you come to this age, there’s so much that goes into it that you’ve got to look at everything,” Koivu said. “I think you’ve got to enjoy the game, and I still do. Physically, you’ve also got to be at the level that you want to be, and mentally that’s probably the biggest part of it. Every single question that you can think of, I think as a player you have to do it and go through what’s the best thing for you to do. I don’t think the time is right now.”

What he does know is that the Coronavirus pandemic is far more important than any shift on the ice, any win or loss with the Wild.

“When you look at the news and look around the world how this affects people, there are far more important things than hockey right now,” Koivu said.