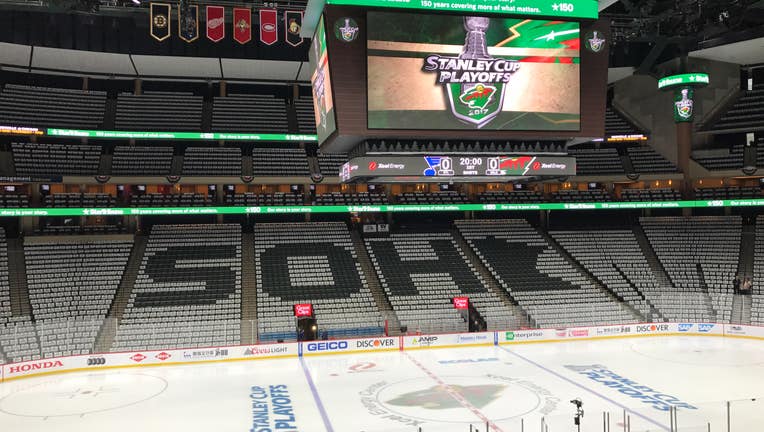 When the Wild take the ice here Saturday night, the team will unveil some new features for fans. (FOX 9)

MINNEAPOLIS - The Minnesota Wild announced Tuesday it will furlough some team employees and reduce hours for others, starting Saturday, amid financial concerns due to the Coronavirus pandemic.

“The Minnesota Wild today announced it is making the difficult decision to reduce hours for some employees and temporarily furlough other employees starting on June 20 due to the revenue impacts COVID-19 has had on our business. We regret the impact this situation has caused our team and community, and we look forward to bringing our full team and the NHL’s best fans back together again as soon as it is safe to do so,” the statement reads.

The news comes as the NHL recently announced training camps for the 24 teams invited to the postseason tournament can start as early as July 10, provided they abide by state and local Covid-19 guidelines. The NHL suspended its season on March 12 due to the Covid-19 pandemic, and the Wild had their game against the Vegas Golden Knights canceled as they were one point out of the final playoff spot in the Western Conference with 13 regular season games left at the time.

The Wild is one of the teams that will be in the playoffs. They’ll be the No. 10 seed in the Western Conference, and will play the No. 7-seeded Vancouver Canucks in a best-of-five series. We don’t know when or where the series will be played.

The top four teams in each conference will play each other in a round robin format to determine seeding for the first round of the playoffs.

The Wild is the first Twin Cities professional sports team to institute furloughs or reduced hours for employees. The Twins are paying all their full-time employees through at least the month of June, and minor league players are being paid $400 per week through what would be their regular season.

In other Minnesota sports, the United soccer team agreed to take a salary reduction as part of its ratified collective bargaining agreement to return to play in July. No other sports teams have announced furloughs or salary reductions to this point.