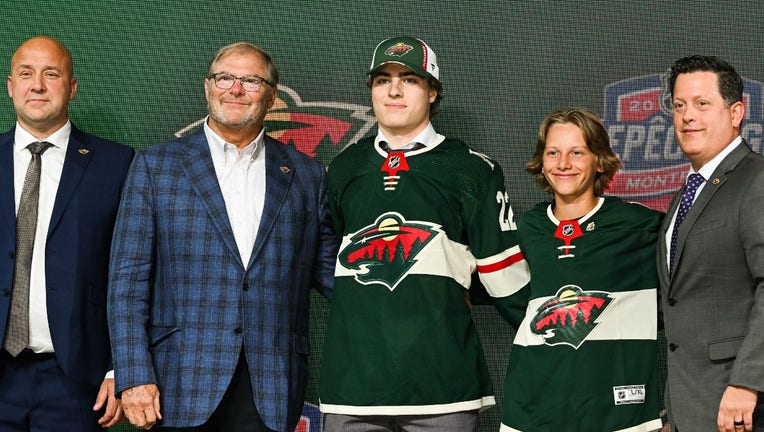 Minnesota Wild pick Liam Ohgren stands between management during the first round of the 2022 NHL Entry Draft on July 07, 2022 at Bell Centre in Montreal, QC  ((Photo by David Kirouac/Icon Sportswire via Getty Images))

MINNEAPOLIS - The Minnesota Wild added a pair of skilled international wingers in the first round of the NHL Draft Thursday night.

With the No. 19 overall pick, the Wild selected left winger Liam Ohgren out of the Swedish Junior League. The 6-1, 20-1 pound Stockholm native collected 58 points, including 33 goals, in 25 games with Djurgarden of the Swedish Hockey League last season. He was also a team captain and won a gold medal with Sweden at the World Junior Championships. He was fourth on that team with nine points in six games.

"Ohgren is a two-way hard skilled winger," said Judd Brackett, the Minnesota Wild’s director of amateur scouting. "He has speed, power and a heavy shot."

Five picks later, the Wild selected right winger Danila Yurov out of the Russian Jr. League with the No. 24 overall pick. Yurov had 36 points, including 13 goals, in 23 games in the Russian Junior League last season. He also played in 21 games with Magnitogorsk of the KHL last year.

Yurov is a left-shot forward who also had four points, including three goals, for Russia at the 2021 Four Nations Tournament. He has 74 points in 64 games over three seasons in the Russia Junior League. He’s the highest-drafted Russian in Wild franchise history.

"Danila is a power forward that skates well and has a terrific shot," said Brackett.

The Wild owns eight total picks in the NHL Draft.