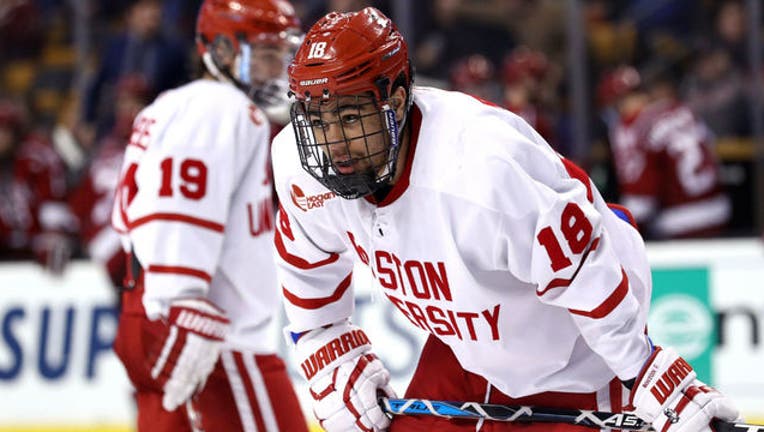 Jordan Greenway #18 of the Boston University Terriers looks on during the third period against the Harvard Crimson during the 2017 Beanpot Tournament Championship at TD Garden on February 13, 2017. (Photo by Maddie Meyer/Getty Images)

ST. PAUL, Minn. (KMSP) - The Minnesota Wild announced Monday they have signed forward Jordan Greenway to a three-year, entry level contract starting with the remainder of the 2017-18 season.

Greenway, 21, just finished his junior season with Boston University, helping the Terriers to a Hockey East Championship and a 2018 NCAA Tournament appearance. In three seasons with Boston, he recorded 92 points in 112 games. He also skated for Team USA at the PyeongChang 2018 Winter Olympics.

Greenway was selected by Minnesota in the second round of the 2015 NHL Entry Draft. He will wear No. 18.

The Wild are currently third in the Central Division with seven games left in the regular season.

Greenway will meet the team in Nashville Monday evening. He is expected to make his NHL debut on Tuesday against the Predators. The puck drops at 7 p.m.