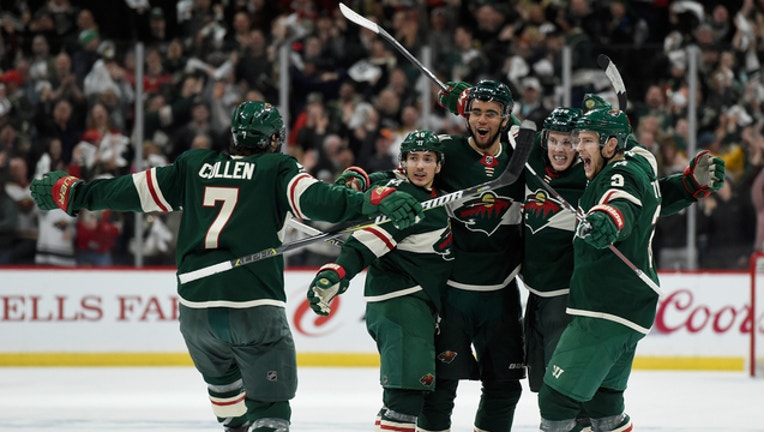 ST. PAUL, Minn. (KMSP) - Mikael Granlund and Zach Parise scored power-play goals in the first period for the spark Minnesota was missing on the road, and the Wild used a four-goal second to roar back in the first-round playoff series with a 6-2 victory over the Winnipeg Jets on Sunday night.

The Wild will try to tie the best-of-seven series 2-2 in Game 4 at home Tuesday night.

Jordan Greenway scored his first NHL goal just 20 seconds after Eric Staal sent a wrist shot past a struggling Connor Hellebuyck, who was pulled for Steve Mason at the second intermission.

Matt Dumba and Marcus Foligno bookended the furious middle frame with goals for the Wild, who won a postseason home game for only the second time in their last nine contests. Mikko Koivu and Nick Seeler each had two assists and Devan Dubnyk made 29 saves, keeping the crowd loud all night.

Blake Wheeler and Tyler Myers scored for the Jets.

After overtaking the Wild with two third-period goals to win 3-2 in Game 1 and dominating the action in Game 2 on the way to a 4-1 victory, the Jets hit some minor turbulence for the first time in the series. The blizzard that blanketed the Twin Cities forced their charter flight to land in Duluth on Saturday afternoon and return to Winnipeg for the night. The Jets skipped the customary morning skate and arrived Sunday about eight hours before faceoff.

Whether or not the Jets were actually affected by the weather hardly mattered, given the way the Wild greeted them after the lackluster performance in Game 2.

The only shot the Jets sent on target over the first 11-plus minutes was the one by Wheeler that went in, a wide-angle attempt on the power play that hit Jonas Brodin's stick and fluttered toward Dubnyk. The puck hit his glove and fell in the corner of the net, a soft goal if there ever was one.

The Wild snapped right back, though. Koivu took the initial shot that set up both goals in the first period, with Granlund waiting for the rebound on the first one . Parise freed himself from a tie-up in traffic with Jacob Trouba to move in position for the redirect of the second one.

The second period went from bad to worse for the Jets, trailing 5-2, when Myers was checked by Foligno and caught his skate at the bottom of the boards. He needed help off the ice and into the locker room and did not return.