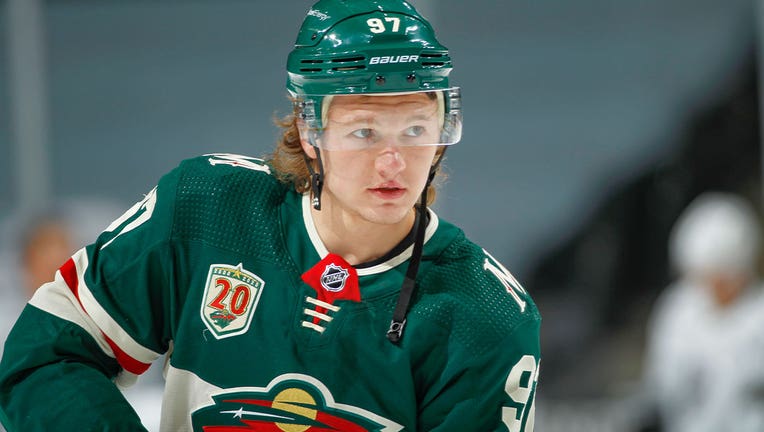 Kirill Kaprizov #97 of the Minnesota Wild warms up prior to the game against the Los Angeles Kings at the Xcel Energy Center on February 26, 2021 in Saint Paul, Minnesota. (Bruce Kluckhohn/NHL / Getty Images)

MONTREAL (AP) - Minnesota Wild general manager Bill Guerin said Kirill Kaprizov remains in Russia and is doing well, denying a report the star winger returned to the U.S. and adding the team is trying to find out more about the situation.

Russian newspaper Sport-Express reported Wednesday that Kaprizov immediately returned to the U.S. after Philadelphia Flyers goaltending prospect Ivan Fedotov was taken to a remote military base in northern Russia because his name was linked to fraudulent military identification.

"He's in Russia, and he's doing fine," Guerin said after the annual GMs meeting at the NHL draft. "He's with his friends and with his family."

Uncertainty surrounding Kaprizov comes at an uneasy time with war still raging in Ukraine after Fedotov reportedly was picked up by law enforcement in Russia last week ahead of a planned move to the U.S. Fedotov, 25, signed with Philadelphia in May after his contract in the Russia-based Kontinental Hockey League expired.

Flyers GM Chuck Fletcher had no update on Fedotov's status.

"I think it's best that I limit my public comments on the matter," Fletcher said. "It's obviously a sensitive situation, and we're doing our best to stay abreast of developments, and that's probably the best way to leave it."

The NHL has not given teams any formal guidance about getting Russian players back before next season, which is a logistical challenge based on the U.S., Canada and other countries suspending travel to and from Russia and Belarus. The Players' Association is beginning to look into how to assist players, if necessary.

Washington Capitals GM Brian MacLellan said he was not worried about star captain Alex Ovechkin or defenseman Dmitry Orlov getting back to North America before training camp opens in mid-September.

"I think obviously there's a little uncertainty," MacLellan, said. "But talking to our guys, I think everybody's pretty comfortable that they're coming back and they're playing next year, so I can go by what our players say and their comfort level with it. And there might be some uncertainty, but I think we're pretty confident they're all coming back to play."

New York Islanders GM Lou Lamoriello said he had no concern about Ilya Sorokin returning and said the young goalie being in Russia had "no bearings" on what the team might do with veteran netminder Semyon Varlamov, who has one year left on his contract.

Kaprizov, the best player on the 2018 gold medal-winning Russian Olympic team who has become the face of the Wild, is set to enter the second season of a $45 million, five-year deal.

Guerin said he was "not overly concerned" about Kaprizov going home to Russia after Minnesota was eliminated in the first round of the playoffs. He's attempting not to worry too much about Kaprizov returning.

"All I'm trying to do is get information and not jump the gun or push the panic button on anything," Guerin said.