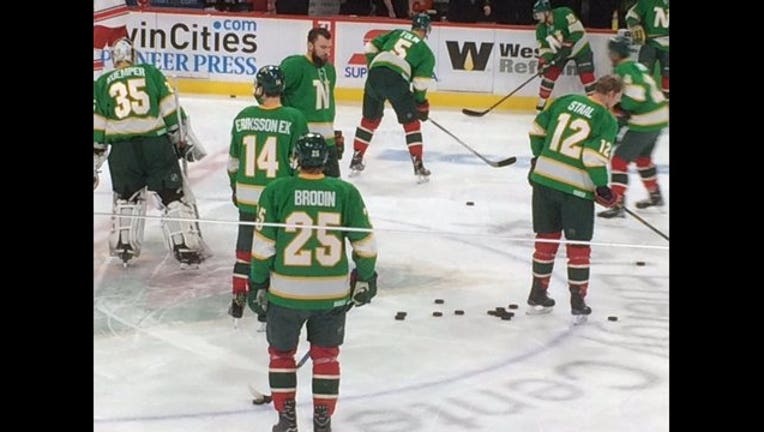 Minnesota Wild players don throwback North Star jerseys for their warmup ahead of Tuesday's game against the Carolina Hurricanes.

ST. PAUL, Minn. (KMSP) - With a 5-3 win over the Carolina Hurricanes, the Minnesota Wild clinched the second spot in the Western Conference and guaranteed themselves home ice in the first round of the Stanley Cup playoffs.

This will be Minnesota’s fifth straight trip to the Stanley Cup playoffs. The Wild will likely take on the St. Louis Blues, former head coach Mike Yeo’s old team, in the first round.

The schedule for Round 1 of the playoffs is expected to be announced on Sunday.

Tuesday marked the final home game of the regular season for Minnesota. The Wild have seen record-breaking attendance at home games at the Xcel Energy Center this season. Total attendance reached 781,951, with an average of 19,071 fans turning out for each home game. The total and average attendance marks are the highest in franchise history, according to a news release.

Tuesday night was a bit of a throwback for longtime Minnesota hockey fans. The players donned retro North Star jerseys to warm up before the game. Left wing Zach Parise took it one step further, wearing his late father J.P. Parise's helmet and gloves.

Both teams also honored center Eric Staal before the game on Tuesday night for playing 1,000 games in the NHL, a benchmark he reached last month against the Winnipeg Jets. Staal previously played with Carolina and the New York Rangers before signing a three-year contract with Minnesota last summer.

The Wild have two games left in their regular season. They will face the Colorado Avalanche for the second time this week on Thursday and the Arizona Coyotes on Saturday.