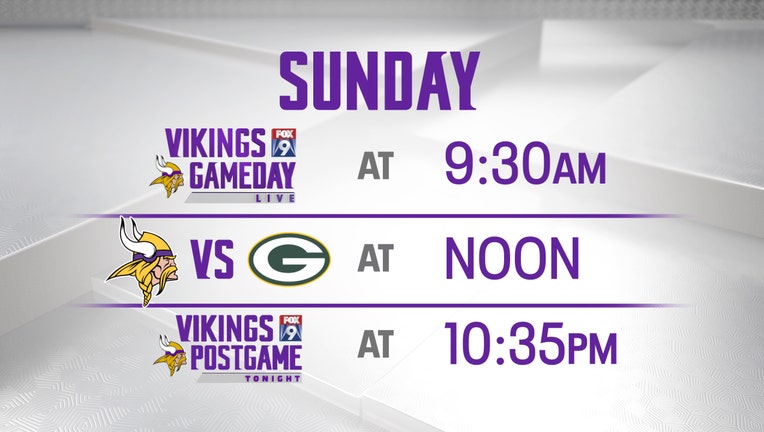 MINNEAPOLIS (FOX 9) - Sunday football is back and FOX 9 will be your gameday destination this season, especially for in-depth coverage of the Minnesota Vikings. From pre-game analysis, live game action, to breaking down the biggest highlights of the day - you can catch it all on FOX 9.

It all kicks off Sunday, Sept. 13. Check out this Sunday's sports lineup on FOX 9:

9:30 a.m. Vikings Gameday LIVE on FOX 9 and streaming at fox9.com/live

You can also stream the Vikings-Packers and Bucs-Saints on the new FOX Sports App.

Buccaneers season preview: Does the talent match the hype?

DANIELLE HUNTER STARTS SEASON ON IR: Hunter will miss at least Sunday's game against the Green Bay Packers, Week 2 at the Indianapolis Colts and Week 3 against the Tennessee Titans. The earliest Hunter can return is Week 4, Oct. 4 at the Houston Texans. Read more

READY TO COOK: Dalvin Cook is in the final year of his rookie contract, and is reportedly seeking at least $10 million per season. He opted out of the Vikings’ virtual offseason earlier this summer as the two sides attempted to work out an extension, but insisted, "I’m prepared enough to go play and I’m physically ready to play. I’m going to let the business take care of business."

Dalvin Cook is still waiting for a long-term contract extension, but it won’t keep him off the field Sunday as the Minnesota Vikings open the 2020 regular season against the Green Bay Packers at U.S. Bank Stadium.

2020 VIKINGS DEPTH CHART: There were no real surprises, especially after the roster was trimmed to 53 players on Saturday. The most notable positions are rookie K.J. Osborn taking over the primary kick and punt return duties, and Dakota Dozier winning the left guard spot on the offensive line. View depth chart