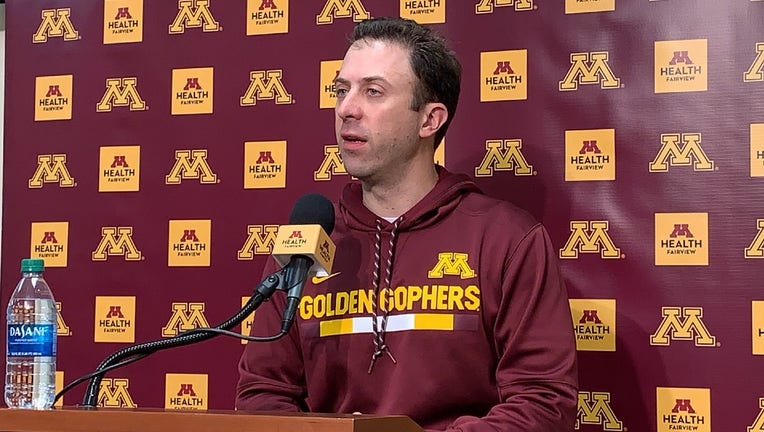 MINNEAPOLIS - There are seven regular season games left in the University of Minnesota men’s basketball season, and seven chances that stand in the way of the Gophers feeling comfortable on Selection Sunday.

There’s always the chance that Richard Pitino’s squad could make a run in the Big Ten Tournament to solidify an at-large bid, but they would prefer to get that taken care of earlier. The Gophers (12-11, 6-7) start that stretch Sunday afternoon against rival Iowa, in what should be a loud and near full atmosphere at Williams Arena.

Minnesota is 10-2 on it’s home floor this season. Their 12-11 record with seven games left might not look the prettiest, but the Gophers’ overall strength of schedule still has them in the NCAA Tournament conversation. That said, they have to do their part over the next three weeks.

“One of the reasons why we’re still very much in the hunt is we’ve got the No. 1 strength of schedule in the country according to BPI. That’s why we’re right there,” Pitino said Friday. “But we’ve got to go win some games, being close and playing a tough schedule doesn’t matter unless you win those games.”

Minnesota’s remaining home schedule includes Iowa, Indiana, Maryland and the regular season finale against Nebraska. The remaining road games are Northwestern, Wisconsin and Indiana. Five those seven games are against teams in the top 60 of the NCAA Net rankings.

The Gophers largely control their own destiny for an NCAA Tournament seeding as they head towards the Big Ten Tournament. None of that matters if they take advantage of their opportunities. Current bracket projections don’t give the Gophers a lot of hope. ESPN’s Joe Lunardi has the Gophers in the “First Four Out” category. Jerry Palm of CBS Sports, USA Today and SB Nation all currently have Minnesota on the outside looking in.

Winning can and will change that. If they do get their name called on Selection Sunday, it will be the third NCAA Tournament trip in four seasons for the Gophers.

“We know that this is the time. We have so few games left coming up, and just give it all. We want to get to the spot where the NCAA Tournament, get back in there, which is hard to do,” sophomore guard Gabe Kalscheur said. “We just need to not just play for ourselves, but play for each other. We all want it, we’ve just got to go get it and truly believe we’re going to do it.”

The Gophers host Iowa Sunday, and the Hawkeyes are coming off an 89-77 loss at Indiana Thursday night. All eyes will be on the match-up featuring the top two centers in the Big Ten, Iowa’s Luka Garza and Minnesota’s Daniel Oturu. If not for Garza’s 23.7 points and 9.8 rebounds per game, Oturu would be a front-runner for Big Ten Player of the Year. Both are in the conversation for the Wooden Award.

Oturu leads the Gophers in scoring (20.5 points per game) and rebounding (11.5). He’s second in the Big Ten in scoring behind Garza, and leads the league in rebounding. In a game dominated by guard play, two big men will take the center stage.

“It’s a bit of a throwback, but I love to see it. It’s like a heavyweight fight at times,” Pitino said.

Garza, albeit in a loss, went off for 38 points at Indiana. He has at least 20 points in 10 straight games, and has scored at least 30 points in five games this season. He got national attention after scoring 44 points in a 103-91 loss at Michigan back in early December.

“Two super talented bigs, probably two of the best bigs in the country so it’ll be cool watching them go at it. I hope Dan gets the best of him,” guard Payton Willis said. “But Dan’s a team player, he’ll be trying to just win the game.”

“We missed a lot of shots and it just zapped our energy. We looked like team that was just frustrated with the fact that we couldn’t hit shots,” Pitino said.

Whether it’s Oturu having a big night like he’s done most of the season, or the guards making perimeter shots, the Gophers can do themselves a big favor with a win over the Hawkeyes on Sunday. If the Gophers can win their four remaining home games, and steal a couple between Wisconsin, Indiana and Northwestern, they’ll be feeling very comfortable on Selection Sunday.

The Gophers are among as many as 10 or 11 teams still competing for an NCAA Tournament bid.

“We know what’s at stake these last seven games. It’s in our control, we just need to stack wins on top of each other,” Willis said.