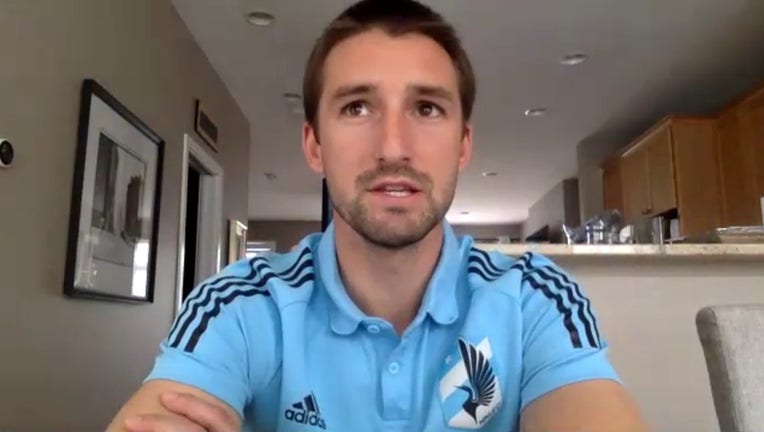 MINNEAPOLIS - Two things are clear after hearing from Minnesota United coach Adrian Heath and midfielder Ethan Finlay: They want to play soccer as soon as possible, but they don’t want to risk the health of their players in doing so.

Heath and Finlay spoke to reporters on Thursday via Zoom, after the team held its third session of individual training at the National Sports Center. A majority of Loons’ players have attended, and they’ve closely followed guidelines issued by Major League Soccer and national health professionals.

Heath and Finlay spoke to reporters on Thursday via Zoom, after the team held its third session of individual training at the National Sports Center

Each player gets his own field to work individually on, coaches watch from afar and players get their temperatures taken before they ever hit the practice field. It’s the first positive step in getting back on the field for meaningful games.

“It’s been a really big step this week to get the ball at our feet,” Finlay said.

Meaningful games was the main topic of conversation as Heath joined the other MLS coaches and league officials on a conference call Wednesday. Play has been suspended since March 12, and there’s talk that all MLS teams could be sent to Orlando and quarantined, resuming the season with a World Cup style tournament.

There is no timetable for when it might happened, and teams would have to be in isolation for four to six weeks.

“I think it’s in the early stages but I think there was a general consensus that we want to get back to playing,” Heath said. “The general consensus is we need to get back to some normalcy. If that means going to Orlando and playing futbol for a month, then that might be it. If this does go ahead, it will be meaningful futbol. There will be points at stake. They do have to be meaningful games, not just going through the motions.”

Meaningful games are especially important to Minnesota United, which got off to a 2-0 start and was preparing for a four-game home stand before MLS suspended play.

Players have a balancing act when it comes to making a decision on Orlando. The games have to mean something, they have to sort out compensation through the players’ association and they have to have assurance for the well-being of the players.

“If the scenario is right, if they feel safe and it’s worthwhile and it’s competitive, guys are going to want to get back to the field. We’re going to try to do everything we can to play games this season,” Finlay said.

"It’s not ideal, we’re aware of that but there’s no perfect solution for this. We’re trying to come up with a situation that’s good for everybody," Heath said.

That might mean playing in stadiums without fans. It’s something unheard of in soccer, where home teams rely on their fans to create a hostile environment for opponents. The culture of soccer involves 90 minutes of screaming fans.

Heath and Finlay will get their first chance to see what that looks like this weekend when the Bundesliga League in Germany gets back to action with games on TV, in empty stadiums.

“I think what goes on in Germany is going to be a real barometer for what goes on around the world. If they can make this work and it becomes a success, I think it will be a huge shot in the arm for the game worldwide,” Heath said.

If they do go to Orlando for a World Cup-style tournament, it’s unclear what the rest of a season might look like. Frankly, they’ll cross that bridge when they get there.

The Loons had built a chemistry after earning their first home MLS playoff game last season. Despite several new faces, they were off to a hot start with eight goals in their first two games. This week’s individual training was a positive step.

“I wasn’t surprised with the start we had. I don’t see anything different. We’ve got a good, professional group. I can’t wait to see them back in the building,” Heath said.

Small-group sessions could start in the next week or two. One step at a time toward the ultimate goal everyone wants: Getting back on the pitch.

“I know the league is trying to find a way for us to play some soccer in a safe environment,” Finlay said.