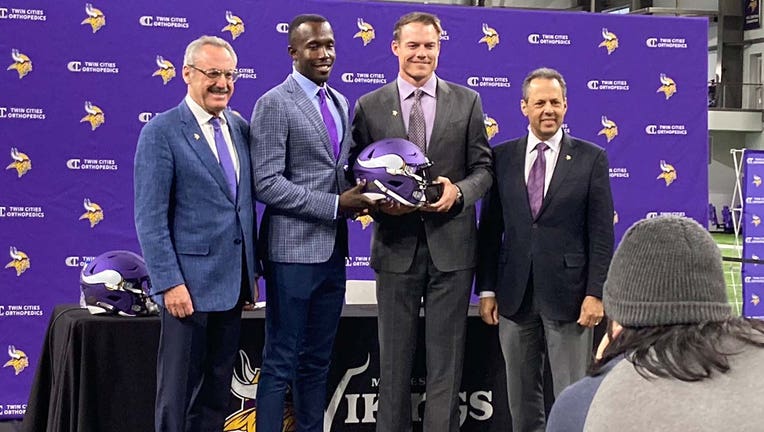 MINNEAPOLIS - A new era for the Minnesota Vikings officially gets underway Sunday afternoon as they open the 2022 regular season against the Green Bay Packers at 3:25 p.m. at U.S. Bank Stadium, a game you can watch on Fox 9.

Kelly O'Connell and Alix Kendall make a bet with Carl Deffenbaugh, an anchor at FOX 6 in Milwaukee, ahead of the Vikings-Packers game at U.S. Bank Stadium on Sunday. Watch it live on FOX 9.

It was an offseason of change for the Vikings after finishing 8-9, missing the NFC Playoffs for the second straight year and third time in four years. The Vikings’ ownership group decided to part ways with general manager Rick Spielman, and head coach Mike Zimmer a day after the Vikings beat the Bears to end the 2021 season.

The Wilf family hired Kwesi Adofo-Mensah to take over a new front office in January. Shortly after winning the Super Bowl as the offensive coordinator with the L.A. Rams, the Vikings hired Kevin O’Connell as the 10th head coach in franchise history. The talk of the offseason since the hires has been about communication and collaboration at every level of the organization.

There’s been a better atmosphere at TCO Performance Center, and we’ll see what it looks like for the Vikings on Sunday against the Packers. The offense is largely the same last year, with tight end Irv Smith Jr. back from a torn meniscus last preseason, then a thumb injury after the team’s first padded practice this training camp that required surgery.

The defense has had an overhaul. The Vikings signed Za’Darius Smith to pair with Danielle Hunter in a new-look 3-4 defense. Harrison Phillips has been brought in as a new nose tackle, Jordan Hicks has replaced Anthony Barr and the team features a mix of veterans and rookies in the secondary, led by Patrick Peterson, Cam Dantzler, Harrison Smith and Cam Bynum.

The Vikings will be without first round pick Lewis Cine on defense. Cine, a former star safety out of Georgia, aggravated a knee injury in practice and didn’t get enough work into be ready for Sunday’s game. He's inactive, as are running back Ty Chandler, offensive linemen Chris Reed and Vederian Lowe, and defensive lineman Esezi Otomewo.

The Packers are expected to be without starting offensive linemen David Bakhtiari, Elgton Jenkins and top receiver Allen Lazard.

The Vikings' new-look 3-4 defense will look to disrupt Aaron Rodgers, who has not thrown an interception against at NFC North opponent since Dec. 29, 2019. That's a streak that covers 380 passes, and 38 touchdowns.