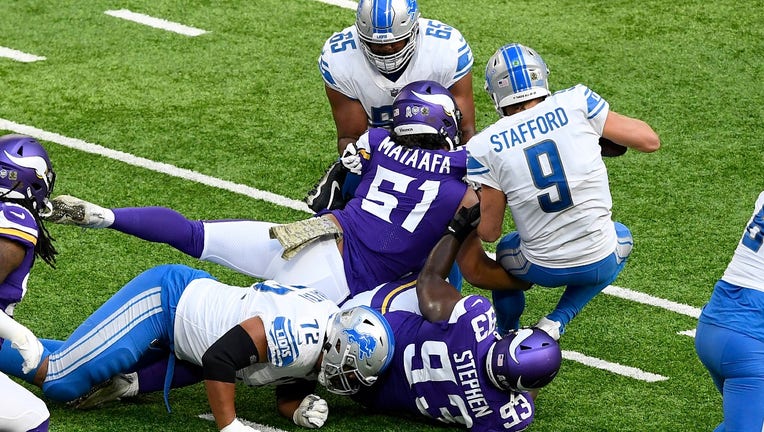 Hercules Mata'afa #51 and Shamar Stephen #93 of the Minnesota Vikings sack Matthew Stafford #9 of the Detroit Lions at U.S. Bank Stadium on November 08, 2020 in Minneapolis, Minnesota. ((Photo by Hannah Foslien/Getty Images))

The news comes with little surprise after the Vikings reportedly agreed to a deal with defensive tackle Dalvin Tomlinson in free agency. Stephen’s release saves the Vikings nearly $4 million against the salary cap.

Stephen made 31 starts on the Vikings’ defensive line the last two seasons, and played primarily at nose tackle in 2020 after free agent signee Michael Pierce opted out of the season due to COVID-19 concerns. Stephen finished with 34 tackles and a half sack this past year, as well as two tackles for loss and three quarterback hits. In 2019, Stephen had 21 tackles and one sack at right defensive tackle.

The Vikings picked Stephen in the seventh round of the 2014 NFL Draft. He spent his first four seasons with the Vikings before playing with the Seattle Seahawks in 2018, before returning to the Vikings the last two seasons.