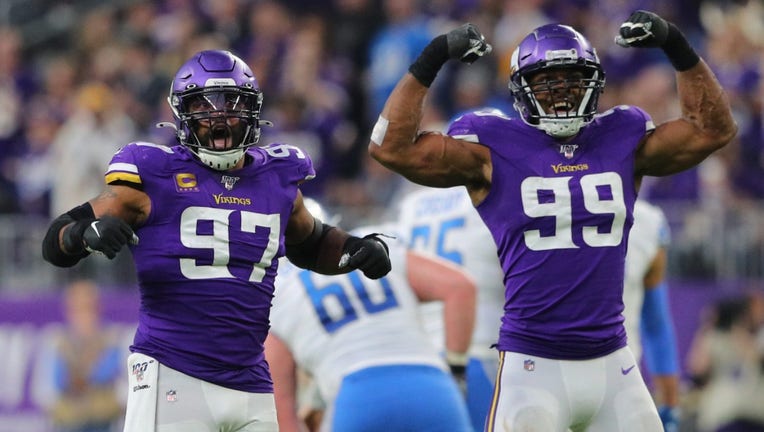 Everson Griffen #97 and Danielle Hunter #99 of the Minnesota Vikings celebrate a sack of David Blough #10 of the Detroit Lions in the fourth quarter at U.S. Bank Stadium on December 8, 2019 in Minneapolis, Minnesota. The Minnesota Vikings defeated th ((Photo by Adam Bettcher/Getty Images))

MINNEAPOLIS - The Minnesota Vikings had until 3 p.m. Tuesday to finalize a 53-man roster, with Week 1 at Cincinnati now less than two weeks away.

The most surprising move of the day? The Vikings cut defensive end Everson Griffen, just a week after signing him. Griffen spent his first 10 seasons in Minnesota before opting out of his contract last year and splitting 2020 between the Dallas Cowboys and Detroit Lions. He finished last season with six sacks, and the hope was he could add more depth to the defensive line with the spot opposite Danielle Hunter a battle between D.J. Wonnum and Stephen Weatherly for the starting spot.

The Minnesota Vikings released defensive end Everson Griffen as they cut down to their final roster.

Browning had been in a competition with rookie and third round pick Kellen Mond, and it looked like Browning might have an edge during the preseason after getting the second team reps during training camp. It appears Browning is going to head back to the practice squad, assuming he clears waivers. That would mean Mond is the No. 2 quarterback behind Cousins, unless the Vikings sign a back-up that’s been waived by another team.

Dozier started every game for the Vikings last season, but his days appeared to be numbered with Oli Udoh getting plenty of first-team reps on the offensive line. Samia was a fourth-round pick in 2019, but was waived with an injury designation after suffering a hamstring injury during training camp.

Mata’afa was entering his fourth season with Minnesota and had 2.5 sacks last year. The Vikings hope to have him on the practice squad.

The Vikings also announced Tuesday they’ve traded a 2022 fourth round pick to the New York Jets for tight end Chris Herndon and a 2022 sixth round pick. The Vikings were seeking tight end depth with Irv Smith Jr. set to have meniscus surgery this week, and waiving Davidson and Zylstra to cut the initial roster to 53 players.

Herndon joins Tyler Conklin and Brandon Dillon as the healthy tight ends on the team. Herndon was a fourth round pick by the Jets in 2018, and played in 33 games, with 25 starts over three seasons. In that time, he had 71 catches for 796 yards and seven touchdowns. He started 12 games as a rookie, and his 502 receiving yards in his first season trailed only Mark Andrews of the Baltimore Ravens.

While the Vikings now have an initial 53-man roster, it can and very likely will change in the coming days as they make moves on injured players, and sign players who have been cut by other teams.