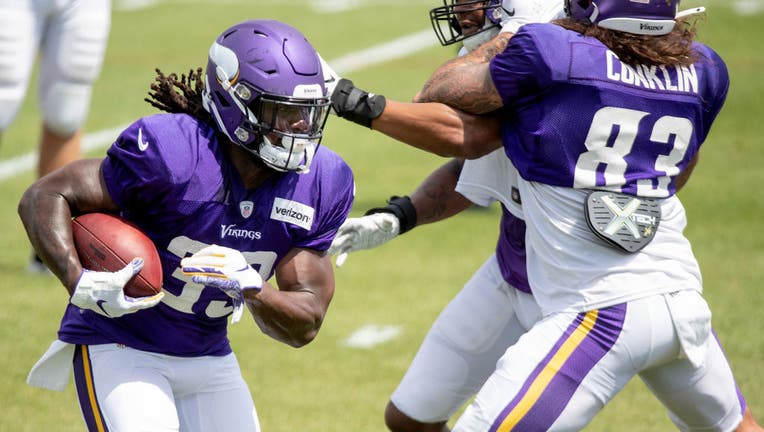 MINNEAPOLIS - If it were up to Minnesota Vikings running back Dalvin Cook, the regular season would already be underway.

Consider it tongue-in-cheek as the Vikings finished up their first week of organized team activities on Wednesday, but Cook didn’t sound like he was joking. Coming off one of the first seasons in his career that he’s stayed mostly healthy, he’s ready to prove he can be one of the Vikings’ top offensive threats in 2020.

"I’m feeling good, I’ve been busting my tail all offseason trying to get ready. For me, it’s all about staying patient. I want to play football right now, that’s how my body feels," Cook said after Wednesday’s workout.

Cook was one of 81 players on the field this week at TCO Performance Center as the Vikings had the first of three OTAs. Only five players in total were missing, and the only two not expected to return immediately are Jeff Gladney and Danielle Hunter. Britton Colquitt and Cameron Dantzler missed Wednesday due to personal reasons.

For Cook, the voluntary workouts are an important part of a team building chemistry, coming off a 7-9 season and missing the NFC Playoffs. Cook finished last year second in the NFL in rushing with 1,557 yards. He was the primary back, with 312 carries in 14 starts. He scored 16 touchdowns, and averaged five yards per carry.

He also became a receiving weapon out of the backfield, making 44 receptions and averaging more than eight yards per catch. Cook’s motivation is simple: He doesn’t want to be on the couch watching when the postseason starts.

"I want to make the playoffs, I think that’s my goal. I’ve never really set a goal since I got to Minnesota, it was always go out there and be Dalvin Cook and everything will take care of itself," Cook said.

He’ll have a new offensive coordinator this year in Klint Kubiak, but he doesn’t expect the offense’s identity to change much. After all, he became one of the best running backs in the NFL under Gary Kubiak, his father.

"I think the similarity is I still got a Kubiak as my coordinator," Cook said.

One offseason adjustment he’s had to make is in his workouts and recovery. This year, he needs to stay healthy longer with the NFL going to a 17-game regular season. He says it’s changed how he approaches keeping his body right for the grind of a football season.

That’s after tearing his ACL as a rookie, and being limited to 10 starts in 2018 due to hamstring, chest and shoulder injuries.

"It was what can I do a little different to not get put in that situation again? It was focusing on the things that you think don’t matter," Cook said. "I knew I had to get bigger and stronger. Hit a couple extra reps, squatted more, focused on my legs more. It was nothing special I did in the weight room, I just attacked it a little harder."

Entering his fifth NFL season, Cook is now a leader in the running back room that features Alexander Mattison, Ameer Abdullah and rookie Kene Nwangwu. Cook says he’s ready for any workload thrown his way, and he proved last year he can stay healthy amid a career-high in carries.