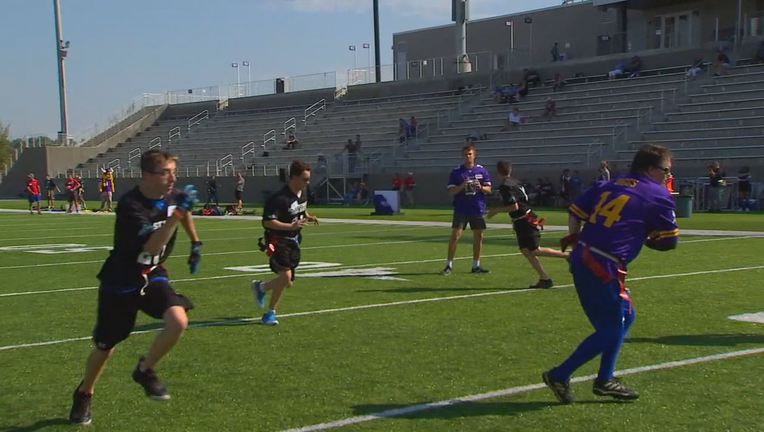 EAGAN, Minn. (FOX 9) - During the NFL season, Tuesdays are normally a day off for the players, but some members of the Minnesota Vikings were back on the practice field for a very special reason.

Some Vikings players helped give back to a group of Special Olympics athletes who were excited to get on the field and learn from the pros.

Vikings players team up with Special Olympics for flag football

During the NFL season, Tuesdays are normally a day off for the players, but some members of the Minnesota Vikings were back on the practice field for a very special reason.

"I'm just as happy as them to be out here,” said Jayron Kearse, Vikings safety. “They're happy to see us, but it's just good to be out here running around and just having fun with them. They can't go out there and do the things that we can do, so it's good for us to come out here and show them that they're just like us."

The Vikings served as coaches and at times, players, for their respective flag football teams. Some members of the Vikings were pleased to see that the athletes not only knew so much about the game, but played it at a high level as well.

"For the most part, they really know about football,” said Kearse. “They know a lot about football. Our quarterback Connor on the other side, told me to run a post for one of our plays, so I was like okay that's pretty good, so they know the game. It's just about us having fun out here and running around."

Vikings say not only did everyone have fun, but they hope to have more of it with these special athletes in the future.

"Any chance they get an opportunity to have fun, I'm in," said Brian O’Neill, a Vikings offensive tackle.