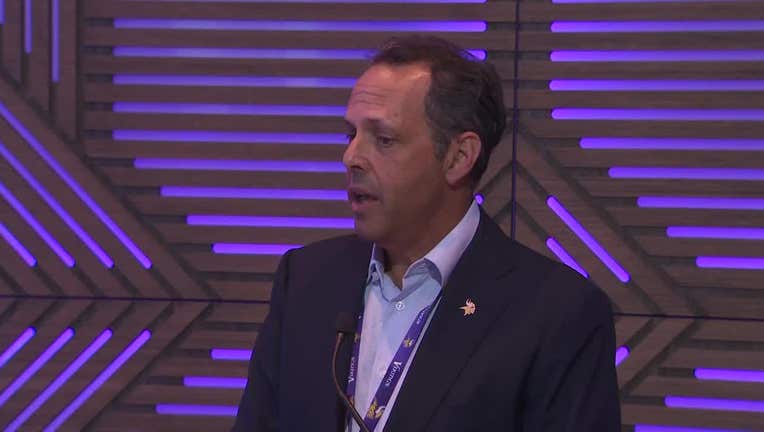 MINNEAPOLIS - Minnesota Vikings owner Mark Wilf spoke publicly Tuesday morning as the team gears up for its first training camp practice in pads at TCO Performance Center, and said he’s "very concerned" that several players on the team are not vaccinated for COVID-19.

Before the start of training camp, offensive line coach Rick Dennison nearly lost his job after declining to get vaccinated. He has since agreed to a senior offensive advisor role that keeps him away from on-field coaching duties.

According to a Washington post report, the Vikings have one of the lowest vaccination rates in the NFL, with 64.5 percent of players fully vaccinated and 70 percent in the process.

"I think it’s safe to say our No. 1 priority is the health and safety of our players, coaches, staff and ultimately the entire community. From that standpoint, we really are encouraging people to get vaccinated. We just want everyone to follow the protocols," Wilf said. "We’re talking about a serious health pandemic. It’s something we want to make sure that our players, our staff, our coaches that they’re full informed of what’s involved here."

Earlier this offseason, Harrison Smith, Sheldon Richardson and Adam Thielen said they had not been vaccinated. Cousins declined to provide his medical information.

Clearly frustrated with some of his players for missing practice Saturday due to being in COVID-19 protocols, Vikings coach Mike Zimmer said Monday he "Just didn’t understand" why players wouldn’t get the vaccine. The real possibility exists that key players could miss games in the regular season if they test positive for COVID-19 or are a close contact, and are not vaccinated.

Wilf on Tuesday also talked about the ongoing legal situation with Jeff Gladney, and interest in bringing the NFL Combine and NFL Draft to Minnesota.

The only player full absent from training camp is defensive back Jeff Gladney, who on Tuesday was indicted on one felony count of assault in an April incident involving his girlfriend in Texas. He’s accused of assaulting a woman, squeezing and grabbing her neck, putting an arm against her neck and throat and striking her multiple times over text messages.

Gladney did not participate in any of the Vikings’ offseason workouts, and his status with the team remains up in the air.

"Obviously allegations like these are very disturbing and something that’s concerning to us as ownership and to our organization," Wilf said. We're talking to the league and really working through to understand this better, and as we get more information we'll let you know where we go on this."

"I think we proved in Super Bowl 52 that this community knows how to handle big events. There’s a culture here of really embracing big events. We’ve put our hat in the ring, if you will, to compete for those," Wilf said. "We’re encouraging the league to think seriously about this and hopefully they’ll consider us as a great venue for that."