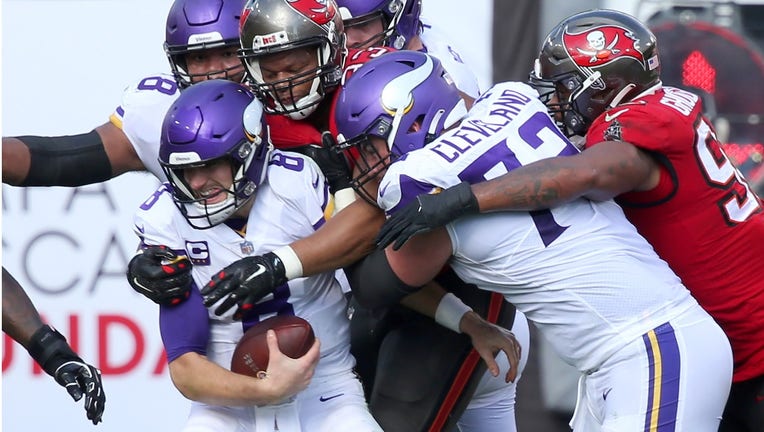 Ndamukong Suh (93) of the Buccaneers in the middle wraps up Kirk Cousins (8) of the Vikings for the sack during the regular season game between the Minnesota Vikings and the Tampa Bay Buccaneers on December 13, 2020 at Raymond James Stadium in Tampa, ((Photo by Cliff Welch/Icon Sportswire via Getty Images))

MINNEAPOLIS - The writing is on the wall for the Minnesota Vikings as they have two games left in what’s been a weird and disappointing 2020 regular season.

The Vikings head to New Orleans for a Christmas Day game against the Saints at Mercedez-Benz Superdome. The last time they were there, Kirk Cousins hit Kyle Rudolph for a walk-off touchdown in overtime in the NFC Wild Card Playoffs.

This time around, it’s much different. The Saints have already clinched a playoff spot, and at 10-4, are one game behind the Packers for the No. 1 seed in the NFC. The Vikings are on life support at 6-8, needing to beat the Saints and Lions in their final two games and get help to make the playoffs.

It’s the only game on Christmas, and it’s on national TV. The football world gets to watch the Vikings fight for their season, which started with talk of contending for a Super Bowl. Entering Friday, they have a two percent chance to make the playoffs.

"We don’t really look at any of that stuff, we’re just trying to play good. We’ll worry about all the other stuff, we’ll let all the prognosticators do their deal and we’ll go out and try to play our very best," Vikings coach Mike Zimmer said.

With their season on the line, the Vikings gave up nearly 400 total yards and 33 points to Chicago in a loss. But they haven’t been officially eliminated yet, so there’s still something to fight for.

"The mentality stays the same, try to go 1-0 each week. Try to put your best foot forward, play your best football, continue to put good things on tape and I think that really is the mindset Week 1 through 17 for all 16 games," Cousins said. "This week will be no different, especially playing on Christmas Day on a national stage."

It’s a time where a football team might find it challenging to stay engaged. They got off to a 1-5 start, battled back to 6-6 only to lose at Tampa Bay and to the Bears. A franchise that talked Super Bowl during the offseason and training camp hasn’t come close to meeting expectations in 2020.

Chalk it up to 2020, the COVID-19 pandemic, playing in empty stadiums, offseason departures and key injuries throughout the season. All that said, the Vikings have not been consistent in their most important games of the year. Harrison Smith said Friday comes down to being a professional, no matter how steep the hill is to climb.

"Every time the tape is turned on, that’s you out there, that’s us out there. It’s the only way people can judge you in this line of work," Smith said. "Doesn’t matter what the situation is, put your best stuff on tape, play your hardest. That stuff should be very understood at this level."

The Vikings and Saints will meet for the fifth time in four seasons on Friday. Zimmer has two playoff wins over Sean Payton, including the Minneapolis Miracle. The two coached together in Dallas and are good friends away from football.

"It’s not difficult, that’s what this whole thing is about. You only get so many game days, so don’t take them for granted," Smith said.