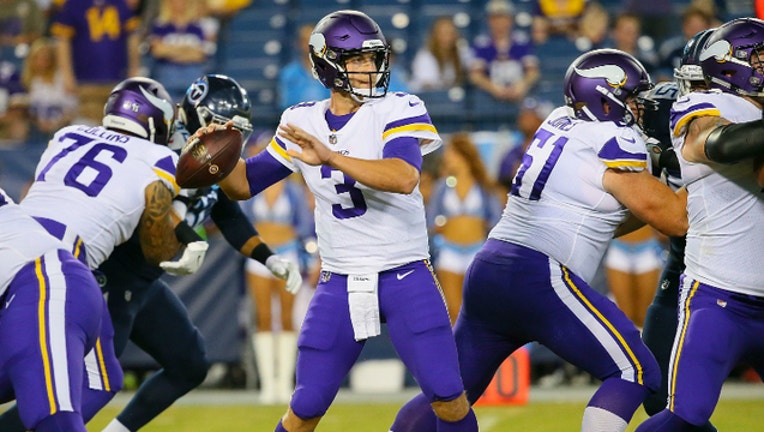 NASHVILLE, TN - AUGUST 30: Quarterback Trevor Siemian #3 of the Minnesota Vikings passes against the Tennessee Titans during the first half of a pre-season game. (Photo by Frederick Breedon/Getty Images)

NASHVILLE, Tenn. (AP) -- The Minnesota Vikings and Tennessee Titans did their best to protect their starters for the regular season, letting Kirk Cousins and Marcus Mariota lead the cheers from the sidelines.

Rookie Daniel Carlson kicked field goals of 39 and 22 yards, and Kyle Sloter added a 24-yard touchdown pass in the fourth quarter as the Vikings beat the Tennessee Titans 13-3 on Thursday night as the teams wrapped up the preseason.

Carlson rebounded from missing a pair of 42-yarders wide left a week ago after beating out Kai Forbath for the job. Carlson connected from 39 yards late in the first half, tying it 3-3. He added a 22-yarder midway through the third quarter, giving the Vikings (3-1) a 6-3 lead.

The starters who did play were the kickers, and the Titans kept Pro Bowl punter Brett Kern very busy. He punted five times before his backup took over.

In the battle of the backups, the Titans dominated the first quarter, outgaining Minnesota 77-8 and holding the ball for more than 12 minutes. Rookie Luke Falk, a sixth-round draft pick out of Washington State, played the whole game. Falk outplayed Cousins' backup Trevor Siemian at least in the first quarter, when the Vikings went three-and-out twice.

The Vikings sacked Falk four times, and he threw for 114 yards. Siemian lasted the first half and was 6 of 11 for 55 yards.

Vikings undrafted rookie Mike Boone had 15 carries for 56 yards. He also caught two passes for 53 yards. Roc Thomas, fighting Boone for the third running back slot, hurt his left ankle when tackled at the end of a screen pass early in the second quarter, and finished with four carries for 12 yards.

Minnesota linebacker Kentrell Brothers, suspended for the first four games of the season , suffered a concussion in the first half. Cornerbacks Horace Richardson and Craig James each hurt hamstrings.

Devin Ross, who started with a chance to push for one of the last wide receiver slots, hurt his right ankle on the first play of the Titans' second series.

No protests were seen by either the Vikings or the Titans. Even Tennessee wide receiver Rishard Matthews, who stayed in the tunnel last season after comments by President Trump in September, was on the sideline during the anthem. He was just removed last weekend from the physically unable to perform list.