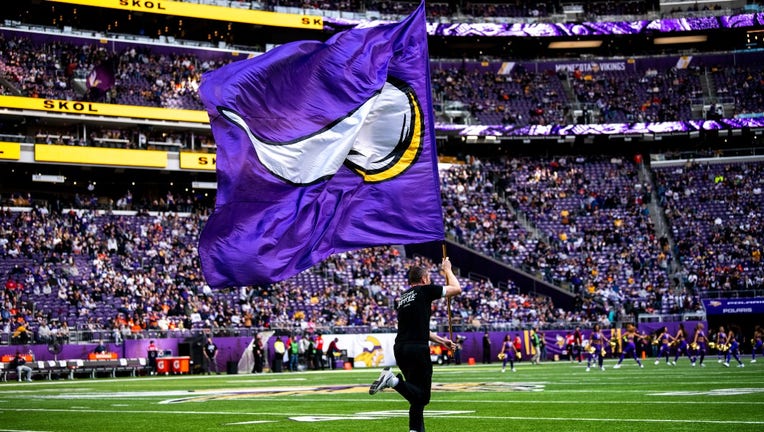 A performer runs with a flag before the game between the Minnesota Vikings and Chicago Bears at U.S. Bank Stadium on January 9, 2022 in Minneapolis, Minnesota.  ((Photo by Stephen Maturen/Getty Images))

MINNEAPOLIS - The Minnesota Vikings and the NFL announced the 2022 regular season schedule Thursday night, and we’re learning what the rest of the season looks like after going to Philadelphia Week 2 for Monday Night Football and to London Week 4 to face the New Orleans Saints.

The Vikings will open the 2022 regular season against their NFC North rivals, the Green Bay Packers and Aaron Rodgers, on Sept. 11 at U.S. Bank Stadium.

The Vikings also host Bill Belichick and the New England Patriots in primetime on Thanksgiving, a 7:20 p.m. kickoff at U.S. Bank Stadium on Nov. 24. It’ll be the first time Minnesota plays at home on Thanksgiving after eight previous road games on the holiday. Five have been at the Lions, and the other three at Dallas. Their most recent Thanksgiving game was at Detroit in 2017, and at Dallas in 2000.

You can watch at least nine of the 17 regular season games on Fox 9. Here’s an early look at the Vikings’ official 2022 schedule.

The Vikings avoided a Christmas Day game, but will host the New York Giants on Christmas Eve at U.S. Bank Stadium, a noon kickoff.

The Vikings will get nine home this season, Kevin O’Connell’s first as head coach. The Vikings get three of their first five games at U.S. Bank Stadium, then get three straight home games Week 11 against the Dallas Cowboys, Week 12 against the Patriots and Week 13 against the New York Jets.

They also close out the regular season with a pair of NFC North road games, at the Packers and Bears.

The Vikings will have three preseason games: At the Las Vegas Raiders, vs. the San Francisco 49ers and at the Denver Broncos.

You can watch a Vikings Schedule Release show at 10:30 p.m. Thursday on Fox 9!