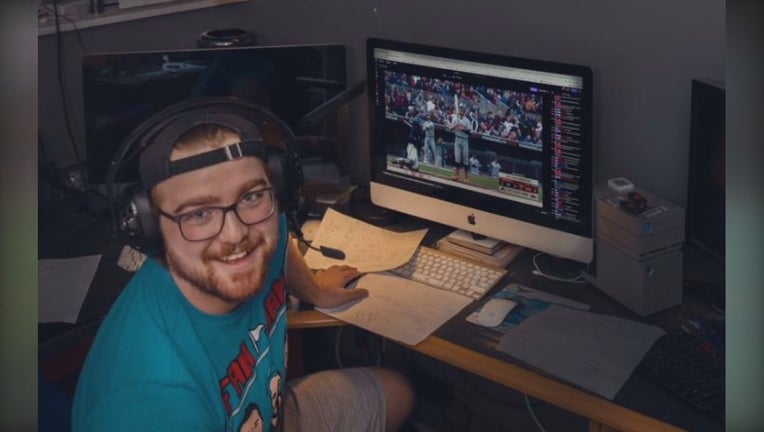 With professional sports sidelined due to COVID-19, Austin Thune is calling play-by-play of Twins games from MLB The Show 20. (Austin Thune)

BROOKLYN PARK, Minn. (FOX 9) - The sights and sounds of baseball have become an eerie silence at Target Field as we all patiently wait for the great American pastime to come back. But the digital ballpark is now becoming a place to be.

Austin Thune of Brooklyn Park could not bear to be without the Twins. So, he got in the booth – actually his basement – to make a virtual season happen.

The fan has been producing his own broadcasts of games simulated on MLB: The Show 20.

Thune is broadcasting the Twins’ schedule via the video game MLB The Show 20. He has it set up so the virtual Twins are playing the same opponents on the same days at around the same times as the real Twins would be doing if not for COVID-19. He's doing it while calling all of the action on a live stream on Twitch.

“I had experience calling football games [for Osseo], but I had never done baseball before even though I wanted to,” Thune told FOX 9 of his broadcasting experience.

“I miss [the Twins] just as much as anyone does,” Thune added. “I thought the best way that I could help myself, as well as provide entertainment to other people, was to ‘broadcast’ the games that they were supposed to be playing.”

The process of producing this is anything but child’s play.

“Any time that I am not spending at work or doing school work, I am scouring on Baseball Reference or scouring teams’ feeds,” Thune said.

Thune is putting in tedious study time to make it all as authentic as possible. Thune is incorporating music when innings switch and researching historical factoids to use during the broadcasts, too. The presentation is also complete with pre and postgame shows.

“I’ve been reaching out to other teams’ beat writers and their websites to try to put the most realistic San Francisco Giants lineup up there, for example,” Thune said. “I’m just trying to make the best product for people to watch until the real team comes out.”

Fans had high hopes for the Twins entering the 2020 season, which begs the question: how is the virtual version of the team is doing early in the season?

“They’re 20-15 right now,” Thune said. “They’re a game and a half up on the Indians. The American League Central has been back and forth, so far.”

It’s all fun and games for now, as Thune and fans around Minnesota await the return of the real thing.

“I talked to a lot of my viewers about us possibly all getting together to go to a game at Target Field to celebrate why we were tuning in every single night,” Thune said. "I just can’t wait to watch the Twins when we can all go back outside.”

If you would like to view one of Austin’s broadcasts, head over to www.Twitch.tv and search for his username “Thuuuuney” to find his broadcast page.