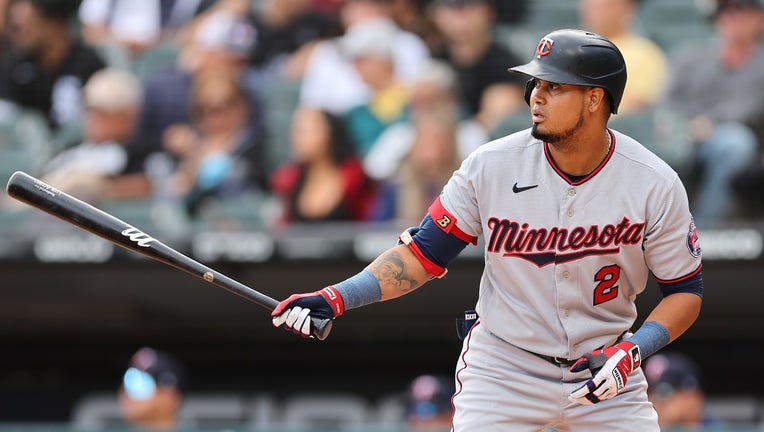 Luis Arraez #2 of the Minnesota Twins at bat against the Chicago White Sox during the second inning at Guaranteed Rate Field on October 05, 2022 in Chicago, Illinois.  ((Photo by Michael Reaves/Getty Images))

MINNEAPOLIS - The Minnesota Twins needed to add starting pitching before the 2023 season opened, and on Friday, they dealt a fan-favorite get one.

The Twins announced they’ve traded infielder Luis Arraez to the Miami Marlins in exchange for starting pitcher Pablo Lopez, and minor leaguers Jose Salas and Byron Chourio. Arraez spent four seasons with the Twins and was the 2022 American League batting champion. He hit .316 with 31 doubles, one triple, eight home runs and had 49 RBI in 144 games.

Fox 9's Pierre Noujaim sat down with Minnesota Twins infielder Luis Arraez, who is off to a hot start this season and is receiving All-Star consideration.

Lopez has been with the Marlins since 2018 and went 10-10 last season in 32 starts with a 3.75 earned run average. He struck out 174 batters and walked just 53 in 180 innings. Lopez, 26, joins a Twins’ starting rotation that includes Sonny Gray, Joe Ryan, Kenta Maeda, Tyler Mahle and Bailey Ober among others.

Last July, Lopez set a Major League Baseball record after striking out the first nine batters to open a game.

Earlier this offseason, the Twins brought back shortstop Carlos Correa on a six-year deal after agreements with the Giants and Mets fell through due to concerns with his physical.