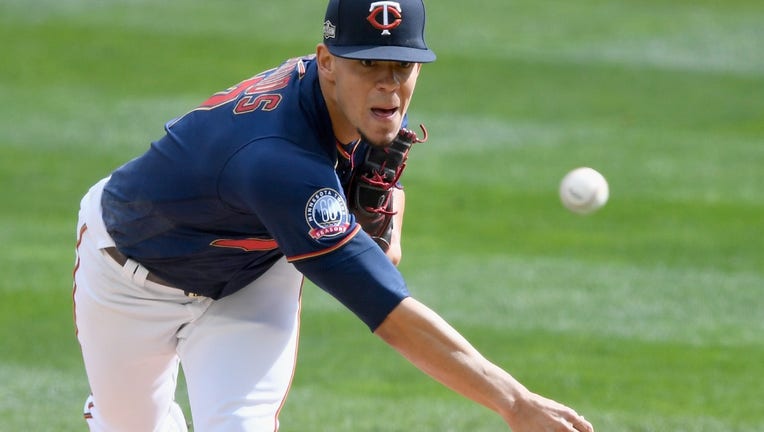 Jose Berrios #17 of the Minnesota Twins delivers a pitch against the Houston Astros during the first inning of Game Two in the American League Wild Card Round at Target Field on September 30, 2020 in Minneapolis, Minnesota. ((Photo by Hannah Foslien/Getty Images))

MINNEAPOLIS - Another year in the Major League Baseball post-season, and the same frustrating result for the Minnesota Twins. They said their goodbyes Wednesday and cleaned out their clubhouse after a 3-1 loss to the Astros in Game 2 of the American League Wild Card Series.

Swept out of the playoffs. That’s 18 straight post-season losses, the longest such streak in professional sports. It’s also eight straight series losses, nine if you include the one-game playoff loss to the New York Yankees in 2018.

After a 36-24 regular season and the franchise’s second straight division title, the season is over after the Twins’ first consecutive home losses of the year. Twins Manager Rocco Baldelli said after the game he had “no idea” of Minnesota’s playoff futility when he first got here two years ago.

This year should’ve been different. They were set up better pitching-wise, and they had depth in the lineup to go with it. The biggest off-season signing in team history, Josh Donaldson, couldn’t play because of an ongoing calf issue. Byron Buxton was limited to pinch-running duties Wednesday, then didn’t use them until it was too late and was picked off in the eighth inning.

This year should’ve been different. They were facing a 29-31 Astros’ team, the worst record in MLB to make the playoffs. Without an expanded playoff format, they wouldn't been been a playoff team. Two games later, the Twins aren’t the team heading to a California bubble.

“We weren’t expecting this. I don’t think anyone was expecting it to end this way. Like life, baseball is also tough, it’s unpredictable. It is what it is, we just have to go home and try to get better,” designated hitter Nelson Cruz said.

The Twins’ inept offense spoiled another solid outing from a starting pitcher. Jose Berrios breezed through three innings, needing just 29 pitches. He ran into trouble in the fourth, issuing a pair of two-out walks. Kyle Tucker then beat an infield shift with an RBI single to give the Astros a 1-0 lead. Berrios needed 32 pitches to get through the fourth.

The Twins tied the game 1-1 in the fifth with their only run-producer of the series, Nelson Cruz, who drove a run-scoring double to left. Marwin Gonzalez scored, but Luis Arraez was thrown out at home to end the inning.

In an interesting move, Berrios was pulled from the game after five innings. He allowed just one run on two hits while striking out four and walking two. He had thrown 75 pitches, 47 for strikes, and was shown on TV pleading his case with Baldelli to stay in the game.

“I felt good, I felt strong. But the one thing I’ve got to remember always is we’ve got a manager, we’ve got a pitching coach, we’ve got alternatives in our dugout,” Berrios said. “So whatever decision they’re going to make, I’m going to respect it 100 percent. They made that decision, and I respect that.”

Cody Stashak pitched a clean sixth, then gave up a one-out solo homer to Carlos Correa. It ended up being the game-winner. In the bottom half of the inning, Eddie Rosario got ejected after striking out, objecting to an earlier strike call from Manny Gonzalez.

The other puzzling move came in the eighth. Cruz drew a walk, then Buxton came into pinch run. The count against Miguel Sano went full, and Buxton was picked off after being caught leaning towards second.

The Astros delivered the knockout punch in the ninth. Michael Brantley walked and Alex Bregman beat the shift for a single. Tucker delivered another single through the shift for a 3-1 Houston lead. Former Twins reliever Ryan Pressly did the rest for the Astros.

Wednesday’s game, and the series, was lost at the plate. The Twins hit 7-for-59 (.119), didn’t hit a home run and finished 1-for-10 with runners in scoring position. The Twins scored twice in two games, with Cruz delivering both RBI.

“It just felt like regardless of what was going on or what part of the order was coming up, we just couldn’t put it together and push any runs across. I don’t think we had enough baserunners, and when we did have those baserunners, we didn’t get them home,” Baldelli said.