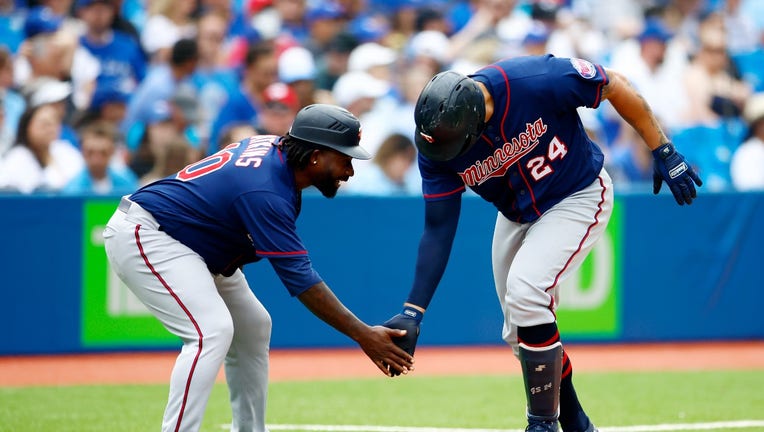 Gary Sanchez #24 of the Minnesota Twins celebrates with third base coach Tommy Watkins after hitting a home run during a MLB game against the Toronto Blue Jays at Rogers Centre on June 05, 2022 in Toronto, Ontario, Canada. ( (Photo by Vaughn Ridley/Getty Images))

The Yankees, a thorn in the Twins’ playoff side the last several years, come to Minneapolis with a 39-15 record, tops in the big leagues. Josh Donaldson is back in town after being traded in the offseason in a series of moves that cleared room for the Twins to eventually sign Carlos Correa.

The Yankees have won six straight games, are 8-2 in their last 10 games and are second-best in baseball with a plus-106 run differential. They’ve allowed just seven runs in their last six wins. They’re also 16-8 away from Yankee Stadium this season.

The Twins worked themselves out of a tough spot before heading home. Battling injuries and some COVID-19 issues, they lost four of five to the Detroit Tigers, one of the worst teams in the American League. Then, they had to travel to Canada to face the Toronto Blue Jays without Max Kepler, Trevor Megill, Emilio Pagan and Caleb Thielbar, put on MLB’s restricted list due to their COVID-19 vaccination status. All four on Monday were activated from that list and will be available against the Yankees.

The Twins left Canada with a series win, beating the Blue Jays 9-3 on Friday and 8-6 on Sunday after collecting a season-high 16 hits. They also have the best hitter in the American League. Luis Arraez, the do-everything utility player, had four hits on Sunday, reached base five times and now leads the AL with a .358 batting average. In 47 games and 162 at bats, Arraez has just 16 strikeouts.

The Twins are 32-24 and maintain a 4.5-game lead in the AL Central over the Cleveland Guardians, and a five-game lead over the Chicago White Sox. The Twins may ultimately get the benefit of being the best team in a struggling division. They’re currently the only team in the division above .500, but they now have six games at Target Field against the Yankees and Tampa Bay Rays.

Gary Sanchez and Gio Urshela, former Yankees, face their old team now each having important roles with the Twins, leading the AL Central nearly a third of the way into the season. Sanchez has played in 43 games and his hitting .229 with seven homers, 13 doubles and is second on the team with 27 RBI. He’s also scored 16 runs. Maybe more importantly, he’s provided a stabilizing presence at catcher as Twins’ pitchers work their way through injuries and COVID-19.

Urshela is hitting .268 with five homers, six doubles and 23 RBI in 49 games, providing stability at third base.

The Twins have managed to stay above .500 despite Sonny Gray going on the injured list twice, Chris Paddack going down for the season and Joe Ryan missing time on the COVID-19 list.

With the next six games at home and a series upcoming against the best team in baseball, can the Twins make a statement this week and start to pull away in the AL Central? Will their fast start prompt some moves before the trade deadline at the end of next month? Can they stay healthy enough to be contenders past a potential division title? Can the pitching hold up?

Many questions still remain with 106 games to go, but the Twins have at least done enough to be relevant for a majority of the summer.