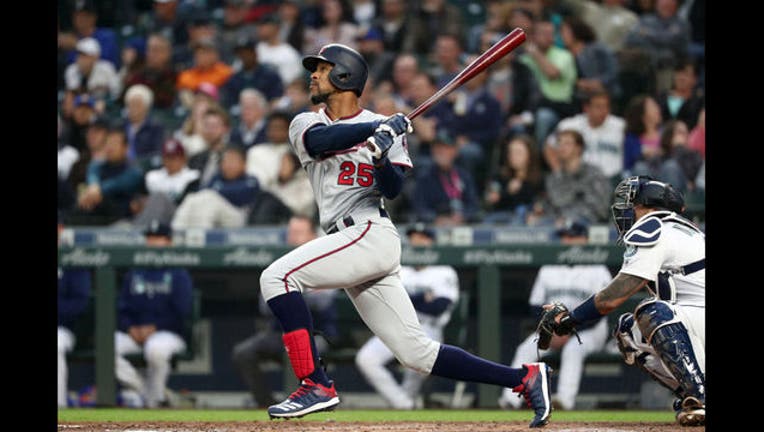 Byron Buxton #25 of the Minnesota Twins hits a three-run home run against the Seattle Mariners in the fourth inning during their game at T-Mobile Park on May 16, 2019 in Seattle, Washington. (Photo by Abbie Parr/Getty Images)

In Miguel Sano’s return after missing the first 41 games, he hit a pair of doubles and drove in a run as the Twins won their straight and took a 4.5 game lead over the Cleveland Indians in the American League Central Division.

C.J. Cron had a four-hit night, including a two-run blast to left that was part of a seven-run fourth inning. Jason Castro and Max Kepler hit solo homers in the third inning to give the Twins an early 2-0 lead. After missing most of last season with a knee injury, Castro now has seven homers in 57 at bats.

Cron’s blast gave Minnesota a 4-1 lead, and Byron Buxton hit a three-run homer to dead center for an 8-1 lead that blew the game open. It was Buxton’s second homer in as many days, and he finished with two hits on the night to improve to .282 on the season.

With Thursday’s four homers, the Twins have hit 87 on the season through 43 games. That ranks third in Major League Baseball, and third in the American League. Thursday’s home runs traveled a combined 1,683 feet.

Michael Pineda also gave the Twins seven strong innings on the mound, allowing three runs on five hits while striking out six and not issuing any walks. He improved to 3-3 on the season.

The Twins had 16 hits in Thursdays win. Their team batting average of .265 ranks second in baseball behind only the Houston Astros. They’re also second in on base-plus slugging at .835.