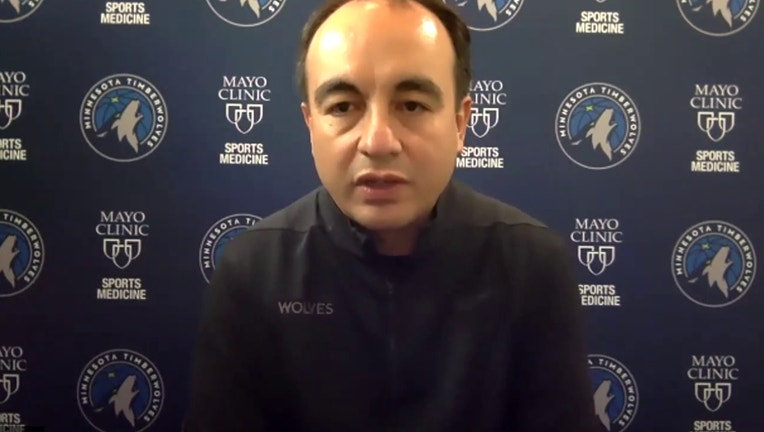 Timberwolves President of Basketball Operations Gersson Rosas talked Tuesday about wrapping up the team's in-market program and getting ready for the NBA Draft next month.

MINNEAPOLIS - The Minnesota Timberwolves got together for the final time Tuesday morning at Mayo Clinic Square for their last workout in the NBA’s In-Market Program.

While the Miami Heat and L.A. Lakers battle for a championship in the NBA bubble, the Wolves have spent more than two weeks in their own Minneapolis bubble. They’ve had daily workouts at Mayo Clinic Square, 5-on-5 scrimmaging and they’ve been quarantined at a downtown hotel.

A team pieced together back in February spent less than a month together before the NBA suspended its season due to the COVID-19 pandemic. The in-market program gave the Wolves a chance to get together and play, and it gave coaches, team staff and front office personnel and chance to look at players without outside distractions.

Gersson Rosas said the big emphasis as the program ends is being ready for the NBA season, even though we don’t yet know when that will be.

“This was a great data point in terms of seeing where guys are at. We’re staring at 75-90 days before we get a chance to prep up for training camp and hopefully prepare for the season,” Rosas said. “We desperately needed this after the hard stop in March.”

There was just as much development on the court as there was off it. Players spent time together in the hotel playing ping pong, foosball and watching the NBA bubble. Rosas said he wishes there were cameras at the hotel as teammates formed bonds over late night competition.

“Honestly this experience has been great. Any time we can get together, get to play, just to be around each other, be around the team and the coaching staff it’s a great opportunity for us to help build for the future,” Jarred Vanderbilt said.

The in-market program ended with the Wolves taking part in an initiative to encourage Twin Cities residents to get out and vote in November. The team visited the George Floyd memorial site, 38th and Chicago in south Minneapolis, which became the epicenter of tension earlier this year after Floyd’s death. It resulted in four Minneapolis police officers being fired, and Derek Chauvin facing murder charges.

The incident is facilitating conversations about doing positive things to create change when it comes to racial inequality and police brutality. The Wolves also participaed in a "Pack the Vote" event on voter education and registration Tuesday afternoon at the Sanneh Foundation Center in St. Paul.

“Those are areas that are much bigger than basketball, much bigger than each individual and it means a lot to everybody that’s here as part of this organization. It’s an area we need to experience, be educated about and do our part,” Rosas said.

Vanderbilt, 21, said this will be his first time voting in the November presidential election.

Rosas and the Wolves are also preparing for the NBA Draft, which is set for Nov. 18. It’s about six weeks away, and Minnesota has a tremendous opportunity to add young talent with the No. 1 and No. 17 picks in the first round, and the No. 33 pick in the second round.

The popular names at No. 1 are Anthony Edwards, LaMelo Ball and James Wiseman. At each selection, Rosas wants a playmaker who has a passion for the game, and plays with a high motor.

“The reality is with draft guys, it’s a developmental process. You want it to be right away, but the reality is it’s a two, three, four-year process,” Rosas said.

If they aim to target specific needs, they plan to do so in either free agency or through trades. For now, Mayo Clinic Square will be closed, current players go home with individual workout plans and we wait for a start date on next season.

So what was the message from Rosas to the team?

“The big emphasis is on being ready,” he said.