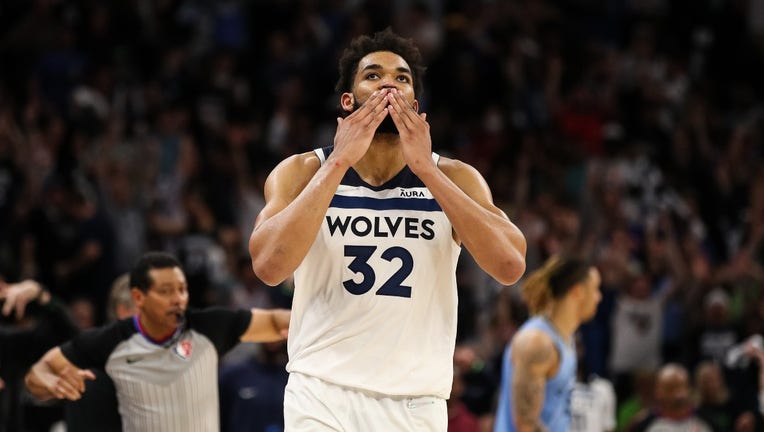 Karl-Anthony Towns #32 of the Minnesota Timberwolves celebrates making a three-point basket against the Memphis Grizzlies in the fourth quarter of the game during Game Four of the Western Conference First Round at Target Center on April 23, 2022 in M ((Photo by David Berding/Getty Images))

The team has not released terms of the agreement, but they reportedly reached a deal with Towns on a four-year, $224 million super max deal at the start of NBA free agency. He’s the face of the franchise that drafted him No. 1 overall in 2015, and he’s now under contract with the Timberwolves through the 2027-28 season. Towns became eligible for the super max extension after earning Third Team All-NBA honors this past season, for the second time in his career.

The Minnesota Timberwolves introduced their newest player Rudy Gobert after trading five players, and four future first-round picks to bring him on the team.

"I couldn’t be prouder to continue my commitment to this franchise and community for years to come," Towns said in a team-issued statement. "Minnesota has become my home and I am excited to continue making the fans proud to support the Timberwolves. My first seven years in the league, it has been an amazing journey. It all started with Flip Saunders taking a chance on me and now here we are. I look forward to all the achievements that are ahead for our team and the Timberwolves fan base."

Towns, 26, has played all seven of his NBA seasons with Minnesota and has made 482 career starts. Over that stretch, he’s averaging 23.2 points, 11.3 rebounds, 3.1 assists and 1.4 blocks per game while shooting 52.7 percent from the field, and nearly 40 percent from three-point range. Towns finished 11th in the NBA in scoring last season at 24.6 points per game, and led the Timberwolves to their second playoff appearance since 2004.

This past season marked the fourth time in the last five years Towns averaged at least 20 points per game while shooting better than 50 percent from the field, and at least 40 percent from the perimeter. That mark ties only Kevin Durant for the most such seasons in NBA history.

"Karl’s No. 32 will one day hang in the rafters of Target Center and this contract extension represents how much he means to this franchise and community," Timberwolves President of Basketball Operations Tim Connelly said in a statement. "He has done so much for the Timberwolves and I’m thrilled he’ll be back for many years to come."

"Karl will go down as one of the best players to ever wear a Timberwolves uniform and we can’t wait to see him back on the court this season and for seasons beyond," Timberwolves’ owners Alex Rodriguez, Marc Lore and Glen Taylor said in a joint statement. "We thank Karl for everything he’s done for our community and look forward to continuing to see his positive impact both on and off the court."

The announcement comes a day after the team introduced star center Rudy Gobert after a blockbuster trade brought the best defensive center in the NBA to Minnesota to team up with Towns in the front-court. If Towns fulfills the super max deal, he'll be with the Timberwolves 14 straight seasons, the longest for any player in franchise history, exceeding fan-favorite Kevin Garnett.