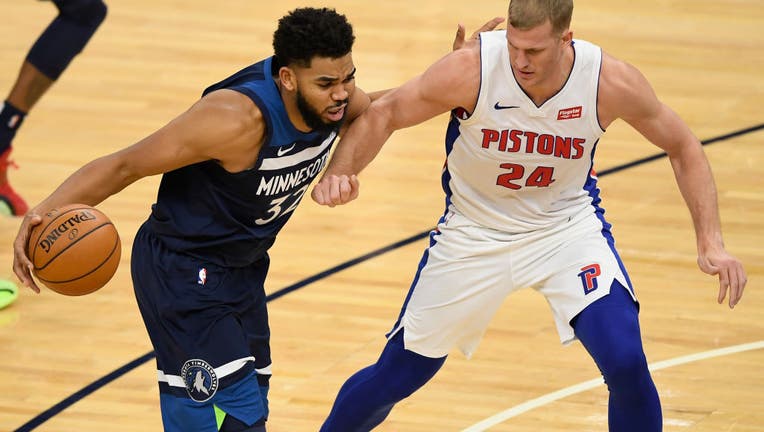 MINNEAPOLIS, MINNESOTA - DECEMBER 23: Mason Plumlee #24 of the Detroit Pistons defends against Karl-Anthony Towns #32 of the Minnesota Timberwolves during the second quarter of the season opening game at Target Center on December 23, 2020 in Minneapo ((Photo by Hannah Foslien/Getty Images) / Getty Images)

D'Angelo Russell pitched in 18 points, and Anthony Edwards -- the first overall pick in the NBA draft last month -- added 15 points in his debut as the Timberwolves overcame a deficit that often reached double digits and was still 12 points midway through the third quarter.

Josh Jackson (19 points) and Derrick Rose (15 points) provided plenty of production off the bench, but the Pistons sputtered down the stretch as the Timberwolves cranked up their defense and were outscored 31-16 in the fourth quarter.

Towns, who made Minnesota's first basket after an 0-for-7 start, gave the Timberwolves their first lead at 98-97 on a 3-pointer with 3:38 remaining.

Russell hit one with 2:05 left for a 103-101 edge, Towns rebounded a missed deep shot on the other end by Derrick Rose, and Beasley buried one with 1:28 to go to send the Wolves on their way.

Blake Griffin, the six-time All-Star, had 15 points and seven rebounds after his 2019-20 season was limited to 18 games by an injury to the left knee that has hampered him throughout his career. The first overall pick in the 2009 draft was one of the few prominent players left after the overhaul commissioned by new general manager Troy Weaver, still plenty capable of carrying the load. Griffin, though, managed only one shot attempt in the fourth quarter.

Russell came off the bench and Ricky Rubio started at point guard for the Wolves due to Russell's late arrival for morning shootaround because he was completing COVID-19 protocols. Coach Ryan Saunders, as promised, had either Russell or Rubio on the floor at all times, even together for a stretch in the third quarter in an extreme small-ball lineup with Beasley and Edwards.

Beasley, who was acquired in a four-team trade from Denver in February before Russell arrived in a deal with Golden State, displayed his score-from-anywhere skill that enticed the

Wolves to re-sign him to a $60 million contract despite a felony count of threats of violence he recently pleaded guilty to after an incident at his suburban home.

Timberwolves: The team held a moment of silence in the empty arena for Jacqueline Cruz-Towns, the mother of Towns who died of complications from COVID-19 in April.

Pistons: Host Cleveland on Saturday for their home opener.

Timberwolves: Start a three-game road trip at Utah on Saturday.