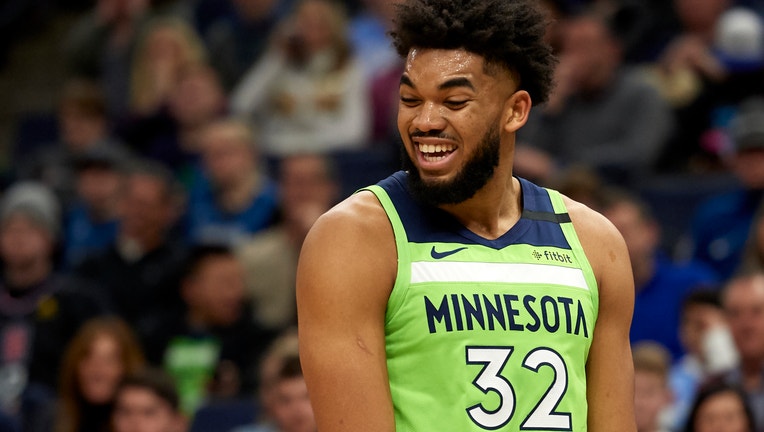 Karl-Anthony Towns #32 of the Minnesota Timberwolves reacts to a call in the second half of the game against the Los Angeles Clippers at Target Center on February 8, 2020 in Minneapolis, Minnesota.. (Hannah Foslien / Getty Images)

MINNEAPOLIS - The Minnesota Timberwolves have to balance the fine line between player safety and giving athletes an outlet to work out, so if and when the NBA calls, they’ll be ready to play.

The Timberwolves announced Wednesday they’re opening Mayo Clinic Square Thursday morning to coaches and players for voluntary individual workouts. It will be the first time the Wolves practice facility is open since the NBA suspended its season in March after Utah Jazz center Rody Gobert tested positive for Coronavirus.

Play was suspended, and all team facilities were also shut down. The Jazz were in Oklahoma City that night, and the Wolves were headed that way the following day to start a six-game road trip. Wolves front office head Gersson Rosas told reporters Wednesday morning they are taking every precaution possible to ensure the safety of players and staff.

The Wolves are especially sensitive to the Covid-19 pandemic, with star Karl-Anthony Towns losing his mother to the virus in April. Eligible players can report to the facility on Thursday, with several restrictions in place:

The NBA allowed teams to start conducting voluntary player workouts back on May 8, but Mayo Clinic Square remained closed due to Gov. Tim Walz’s “Stay at Home” order being in place. That was adjusted on Sunday, and the wheels were in motion for the Wolves.

They feel confident that their approach, while conservative, will work.

“We’ve done everything within our power to make sure that they’re safe and that the environment is as controlled as it can be,” Rosas said.

Dr. Robby Sikka, the Timberwolves' vice president for basketball performance and technology, says the team is in constant contact with the NBA and medical professionals to determine what they can do to bring players and staff normalcy, but also keep them safe.

“Nobody wants to be somebody that deviates and nobody wants to be one that cuts corners on this. This is a global pandemic, there’s no place for cutting corners,” Sikka said Wednesday morning. “This is simply about getting players a safe place to come and shoot and come and workout.”

If the voluntary workouts are a success, it could lead to small-group sessions. It’s too early to know when that could happen, and it’s too early to know if and when the NBA could resume play. Simply, it’s out of the Wolves’ control, and they’re not going to take any unnecessary chances.

“Dr. Fauci said it best a few weeks ago, we don’t make the timeline, the virus makes the timeline. We have to do what’s right by our community and that comes first and foremost,” Sikka said. “If we do that, we have an opportunity to do something going forward. We don’t know what the next step is.”

Opening Mayo Clinic Square is the first step for the Wolves to get back to basketball, and a sense of normalcy. There are risks, but the Wolves are going to make calculated, educated decisions to get back on the court.

“They want to be in an environment that they are familiar with, but they understand this is a first step. It’s a small step, and for some of them it’s just the opportunity to mentally get in a place where it’s a safe haven for them,” Rosas said. “We’ve got a long way to go, this is just a new step moving forward for us.”