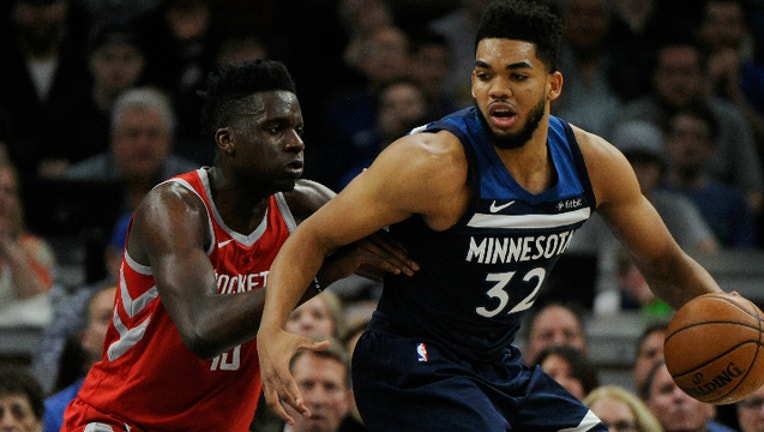 MINNEAPOLIS, MN - APRIL 23: Clint Capela #15 of the Houston Rockets defends against Karl-Anthony Towns #32 of the Minnesota Timberwolves in Game Four of Round One of the 2018 NBA Playoffs. (Photo by Hannah Foslien/Getty Images)

MINNEAPOLIS (AP) -- James Harden gave Houston quite the jump-start with 22 of the team's 50 points in the third quarter, as the Rockets cruised past the Minnesota Timberwolves 119-100 on Monday night to take a 3-1 lead in their first-round playoff series.

Chris Paul scored 15 of his 25 points in the near-record third for the Rockets, who turned a 50-49 halftime edge into a 31-point advantage after the torrid 12-minute span. The only team in the history of the NBA playoffs with more points in one quarter was the Los Angeles Lakers, who scored 51 points in the fourth on March 31, 1962, in a loss to the Detroit Pistons.

Clint Capela added 14 points and 17 rebounds, Eric Gordon finally got going with 18 points off the bench and the Rockets easily recovered from their rough start.

Karl-Anthony Towns had 22 points and 15 rebounds for the Timberwolves, who were dominated on both ends of the floor during the decisive third and missed 14 of 21 shots over several panicked possessions.

The series shifts back south to Houston for Game 5 on Wednesday night.