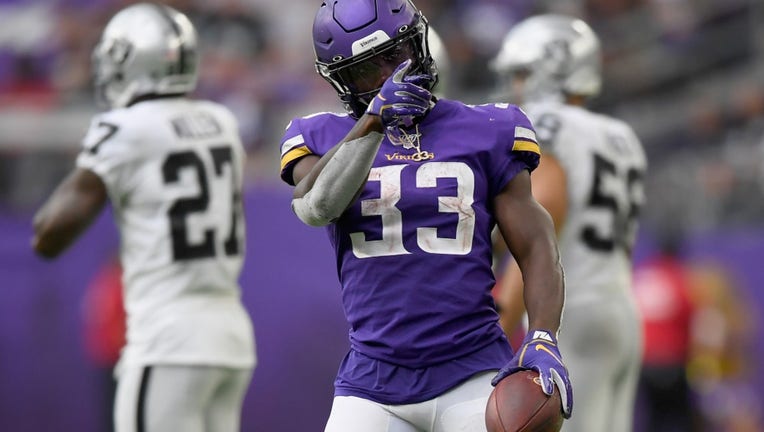 Dalvin Cook #33 of the Minnesota Vikings celebrates a first down against the Oakland Raiders during the third quarter of the game at U.S. Bank Stadium on September 22, 2019 in Minneapolis. ((Photo by Hannah Foslien/Getty Images))

MINNEAPOLIS - We’re about six weeks away from the start of training camp for the Minnesota Vikings, depending on what state and local health officials decide with the Coronavirus pandemic.

TCO Performance Center, where the Vikings would hold camp, reopened last week to about 60 essential staff as the organization continues to abide by Covid-19 guidelines. Only players receiving medical treatment are allowed at the facility, and the coaching staff continues to work remotely.

Dalvin Cook opting out of team activities without contract extension

According to ESPN’s Adam Schefter, running back Dalvin Cook won’t be participating in any further team activities until he can work out a long-term deal with the Vikings.

They went through a virtual NFL Draft, virtual rookie camp and a virtual offseason.

The next hurdle for GM Rick Spielman and the front office is working on a new contract for running back Dalvin Cook. Reports emerged last week that Cook, entering the final year of his rookie contract, will not participate in team meetings or virtual activities until he can get a new contract worked out. He’s currently due to make about $1.3 million in base salary this season, which is well below what he’s worth.

As he pursues a bigger deal, we can’t forget his injury history with the Vikings. Cook tore his ACL four games into his rookie year. He played 11 games and had 10 starts two seasons ago, missing time with a nagging hamstring injury. Last year, he missed two games and halves of two others with a chest/shoulder injury. That said, he still ran for 1,135 yards and 13 touchdowns, and had another 519 receiving yards. He became a focal point of the offense, and his role is only expected to get bigger with Gary Kubiak taking over as offensive coordinator.

So if a deal can’t be worked out, what does the Vikings offense look like without Cook? Here’s a look at the current depth chart.

Kirk Cousins is the guy, there’s no questioning that. So much so that the Vikings gave him a two-year contract extension during NFL free agency. He passed for more than 3,000 yards last season, with 26 touchdowns and just six interceptions. His back-up, Sean Mannion, made one start last year and completed just 12 passes for 126 yards. Jake Browning spent the season on the practice squad, and the Vikings drafted Iowa quarterback Nate Stanley. The Vikings need Cousins to stay healthy, and it can’t be ignored that Cook was his No. 2 target last year.

Behind Cook, the Vikings relied on a plethora of running backs last season. Rookie Alexander Mattison was the clear-cut No. 2, with 462 yards and one touchdown on 100 carries. Mattison also made 10 catches for 82 yards. After that, the carries are between Mike Boone and Ameer Abdullah, who had a combined 72 carries for 388 yards and three scores. Would Mattison be ready to be the No. 1 running back if Cook is out? It’s a question the Vikings likely don’t want to address in mid-June.

Without Cook, the Vikings are minus their top two receivers from 2019. Stefon Diggs was sent to Buffalo for four draft picks. Adam Thielen would need to re-emerge as the top receiving threat after dealing with a hamstring injury much of last season. He finished with 30 catches for 418 yards and six touchdowns. He was a Pro Bowl pick two years ago after making 113 catches for more than 1,300 yards and nine touchdowns, all career-highs. The Vikings signed Tajae Sharpe, who made 35 catches for 329 yards and four touchdowns in 15 games for the Tennessee Titans last year, in free agency. Bisi Johnson returns after a rookie season where he finished with 31 catches for 294 yards and three touchdowns. The Vikings got the No. 22 overall pick in the trade for Diggs, which they used to draft LSU star Justin Jefferson. He finished with 111 catches last year, but is he ready for a major receiving role as a rookie?

The Vikings have a trio of tight ends in Kyle Rudolph, Irv Smith Jr. and Tyler Conklin to use in their offense. Rudolph was Minnesota’s third leading receiver last year with 39 catches for 367 yards and six touchdowns. Right behind him, Smith had 36 catches for 311 yards and two touchdowns. With or without Cook, the Vikings will need more from Rudolph and Smith this season.

If the Vikings are going to have consistent success on offense, whether it’s creating lanes for running backs or keeping Cousins upright, they’ll need a big year from the offensive line. The most likely front five to start Week 1 against Green Bay would be Garrett Bradbury at center, Pat Elflein at guard, Brian O’Neill and Riley Reiff at tackle and a combination of Rashod Hill, Dru Samia and rookie Ezra Cleveland for the final spot. The Vikings also have Dakota Dozier and Aviante Collins for depth, along with the non-starters between Hill, Samia and Cleveland.

Cook’s $1.3 million in base salary is currently around 50th among running backs, and that needs to change. The Vikings need to reach an agreement with Cook before training camp, especially if they intend to make him the focal point of the offense.