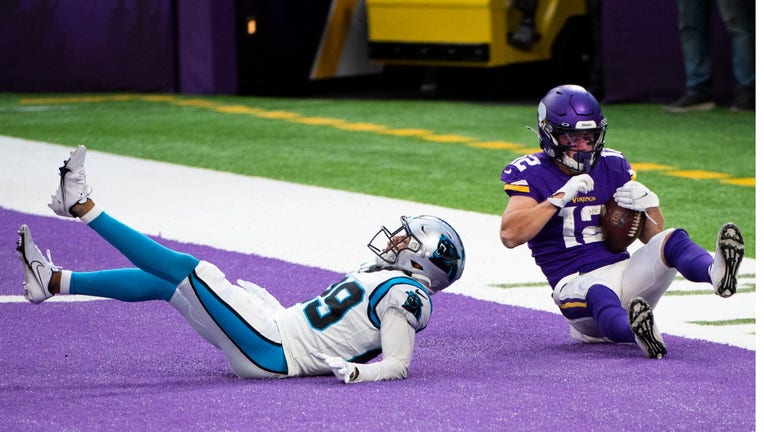 Chad Beebe #12 of the Minnesota Vikings catches the ball over defender Corn Elder #29 of the Carolina Panthers for a touchdown to tie the game in the fourth quarter at U.S. Bank Stadium on November 29, 2020 in Minneapolis, Minnesota. ((Photo by Stephen Maturen/Getty Images))

MINNEAPOLIS - The Minnesota Vikings have some roster decisions to make after their 2020 season ended with a 7-9 record, and without a trip to the NFC Playoffs.

For the fourth time in seven seasons, Mike Zimmer and the Vikings won’t get the chance to compete for a Super Bowl. An offseason of evaluation and roster construction begins, and the front office works to get ready for the NFL Draft and free agency.

The Vikings have 16 players that could return next season, or leave in free agency. Here’s a look at each.

Anthony Harris finished third on the Vikings’ defense with 104 tackles and played all 1,074 snaps on defense this season. He played 2020 on the franchise tag at more than $11 million, and was the subject of offseason trade rumors. After tying for the NFL lead in 2019 with six interceptions, including a defensive touchdown, he didn’t have any interceptions in 2020. If he wants to play for a similar salary in 2021, it won’t be in Minnesota.

With Anthony Barr sidelined in Week 2, Eric Wilson got a bigger role in the Vikings’ defense and led the team with 122 tackles. He also had three sacks, and three interceptions. He’s valuable depth for Zimmer’s defense behind Barr and Eric Kendricks.

Todd Davis signed with the Vikings to provide linebacker depth after Barr’s season-ending injury. He played in 11 games, with six starts, and made 35 tackles with two tackles for a loss.

George Iloka came to the Vikings to give a beat up secondary depth. He played in just four games and made six tackles before going down with a season-ending knee injury in practice.

Rashod Hill played in 16 games, starting the regular season finale and playing every offensive snap at Detroit. He played 25 snaps at Tampa Bay, and saw time on special teams. He could provide offensive line depth in the future.

Ameer Abdullah is the Vikings’ primary option on kick returns, but saw time in the run game when Alexander Mattison was out after having an appendectomy. He had a receiving touchdown in the regular season finale at Detroit, but his primary role on special teams could keep him in Minnesota.

Sean Mannion didn’t take a single snap in 2020, as Kirk Cousins threw for more than 4,200 yards and 35 touchdowns. His teammates call him a consummate professional in the locker room and team meetings. Mannion hasn’t played since the regular season finale against the Bears in 2019.

Dakota Dozier won an offensive line starting job in training camp, and played every offensive snap in 2020. With Dozier and the rest of the offensive line, Dalvin Cook finished second in the NFL in rushing. Dozier struggled in pass protection, but has promising potential with Minnesota moving forward.

Brett Jones got two starts in 2020 after Ezra Cleveland went down with an ankle injury, and otherwise spent the season on special teams. He’s been released and brought back several times, and would be open to returning to the Vikings next season.

Jaleel Johnson started all 16 games on the defensive line and finished with 22 tackles, and 1.5 sacks. The hope is Johnson can have an improved 2021 with Danielle Hunter back from injury, and Michael pierce returning after opting out of the 2020 season.

Chris Jones played in nine games and got three starts with the Vikings as the secondary was decimated by injuries. He finished with 18 tackles, but had a couple of bad missed tackles during the season that had Mike Zimmer unhappy. It’s unlikely Jones is back in 2021, assuming Mike Hughes returns.

Ifeadi Odenigbo became a regular on the defensive line with Danielle Hunter out, Everson Griffen gone and Yannick Ngakoue traded away after six games. Odenigbo started 15 games and led the Vikings among current players with 3.5 sacks. He finished with 16 tackles and forced a safety against Jacksonville.

Kyle Hinton spent part of the season on the Vikings’ practice squad, but the offensive guard never got to the active roster.

Mike Boone saw action in 16 games, primarily on special teams. He had five carries for 29 yards against the Lions, and scored his only touchdown of the season at New Orleans backing up Dalvin Cook.

Chad Beebe had a rollercoaster 2019 season, but was healthy for a majority of it for the first time in his career. He made 20 catches for 201 yards and two touchdowns, including the game-winner against the Carolina Panthers after muffing a punt. Beebe was primary punt returner when K.J. Osborn didn’t play, and provided depth at receiver.

Jake Bargas played one game this season for the Vikings and got seven offensive snaps at New Orleans, replacing the injured C.J. Ham. It’s unlikely he returns to Minnesota.