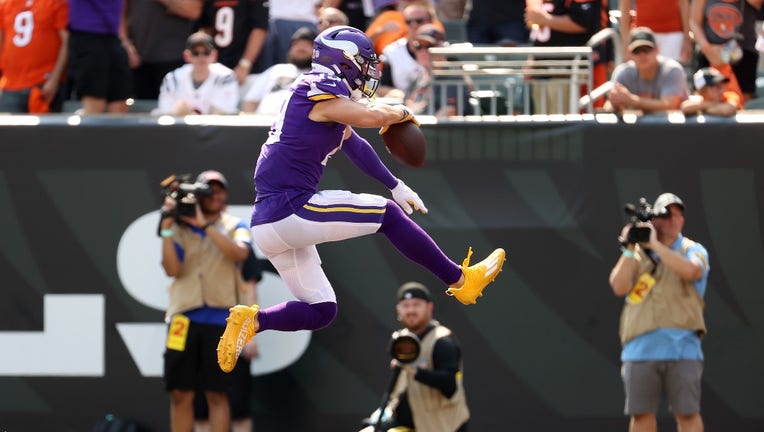 Adam Thielen #19 of the Minnesota Vikings celebrates after a 24-yard touchdown reception during the third quarter against the Cincinnati Bengals at Paul Brown Stadium on September 12, 2021 in Cincinnati, Ohio.  ((Photo by Andy Lyons/Getty Images))

MINNEAPOLIS - The Minnesota Vikings are 0-1 after a 27-24 loss in overtime at the Cincinnati Bengals on Sunday.

In a scenario all too familiar to fans, it was largely self-inflicted mistakes that did the Vikings in for their first loss of the season. The challenge now is to learn from those mistakes, and bounce back, starting with the Arizona Cardinals this week.

Vikings coach Mike Zimmer after Week 1 loss: 'We shot ourselves in the foot'

After letting the game slip out of their hands, quite literally, head coach Mike Zimmer made no excuses for his team's play during a post-game news conference.

It’s only one game, but it’s already a pivotal point in the season as the Vikings travel to Arizona, then host Seattle, Cleveland and Detroit. After starting 0-3 last season, the Vikings can’t afford another slow start if they want to be a playoff team in 2021. Here are takeaways from Sunday’s loss.

The Vikings committed 14 penalties in Sunday’s loss, 12 that were enforced and 10 that were on the offensive line. They had four penalties on the first series alone. The offensive line was charged with six false starts, four holding calls and Oli Udoh was flagged for a personal foul. Kirk Cousins was also sacked three times.

Everyone had their low points on the offensive line Sunday. Simply put, they have to play better.

The Vikings appeared ready to steal a road win in overtime despite all the mistakes, driving to kick a game-winning field goal. Then Dalvin Cook fumbled, or did he? The Bengals recovered it and the play went to review, but several replays showed Cook appeared to be down by contact before the ball came out. There wasn’t enough video evidence to overturn the call, and Cincinnati drove to make the game-winning kick.

If Cook doesn’t fumble, the Monday narrative is likely focused on overcoming adversity for a road win after a day full of mistakes. Instead, the Vikings are 0-1.

One of the top storylines of training camp was the No. 3 receiver position after Justin Jefferson and Adam Thielen. The job, for the moment, has been won by K.J. Osborn. He had a big day Sunday, with seven catches for 76 yards. Osborn made a catch for a 25-yard gain down the sideline on a 3rd-and-24 that set up the Vikings’ first touchdown. He also made a catch on 4th-and-4, keeping the game alive as the Vikings forced overtime with a Greg Joseph field goal.

"I just wanted to help the team win any way I could. I knew I wanted to step my role up on offense, so all offseason I was just trying to get better at my craft. It’s good that some of that is starting to pay off," Osborn said Monday.

GREG JOSEPH COMES THROUGH IN THE CLUTCH

Greg Joseph hadn’t kicked in a game in nearly two years, but he was perfect on Sunday. Joseph made all three extra points, and had to hit from 53 yards twice as time expired to force overtime. His first was ruled dead after Cincinnati called a timeout. He then split the uprights, giving the Vikings life in a day filled with mistakes.

For a franchise plagued by kicker issues, Joseph was a breath of fresh air.

Sunday marked the debuts for Michael Pierce and Nick Vigil with the Vikings’ defense, and both had their moments. Pierce finished with seven tackles, including two sacks, after opting out of the 2020 season due to COVID-19 concerns. Vigil, playing for the injured Anthony Barr, finished with 10 tackles, one sack and two tackles for a loss.

Danielle Hunter played in his first game in nearly two years, and after a quiet start, made a splash late. He finished with six tackles, including a sack. Hunter said Monday he was surprised that he felt like he was in good football shape, and never got tired.

The day after a loss is often phrased "Overreaction Monday," but there’s no reason to panic about the Vikings yet. There’s two reasons: 1) there are 16 games left, and 2) the Vikings are actually atop the NFC North at 0-1.

You read that correctly. The Packers lost to the Saints 38-3, the Lions lost to the 49ers 41-33 and the Bears lost to the Rams 34-14. By virtue of score differential, the Vikings lead the NFC North after Week 1.