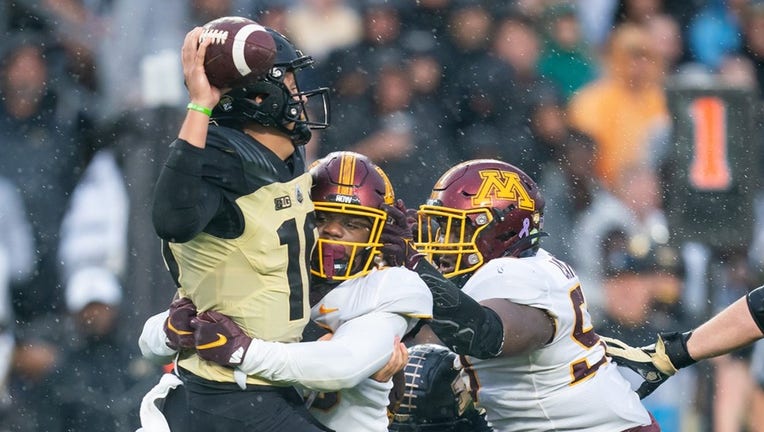 MINNEAPOLIS - The University of Minnesota football team survived a mostly miserable day for football, getting a 20-13 win at Purdue on Saturday while playing most of the day at Ross Ade Stadium in a downpour.

It was a game the Gophers simply couldn’t afford to lose, after a stunning loss on Homecoming to Bowling Green the week before. Minnesota enters its bye week with a better taste in its mouth, as Nebraska looms on Oct. 16 at Huntington Bank Stadium.

A MUCH-NEEDED BOUNCE BACK FOR GOPHERS

It didn’t have to be pretty and it probably wasn’t going to be with both teams playing in a downpour, but Saturday’s game at Purdue was as close as it gets to a must-win early in the season. The Gophers were coming off one of their worst performances under PJ Fleck in a 14-10 home loss to Bowling Green the week before. If Minnesota had any aspirations of being in the Big Ten West race, they had no option but to beat the Boilermakers.

Fleck’s word of the week was "respond," and they did as such with a league win on the road. It’s Fleck’s fourth straight win over Jeff Brohm, and his first in 18 tries after trailing at the half.

Tyler Nubin made four tackles Saturday, but his biggest play of the game came with Purdue driving for a potential game-tying score. Aiden O’Connell overthrew a receiver, and Nubin almost made a diving interception near the goal line. On the next play, Nubin baited him into a bad throw, stepped in front of the receiver and made an easy game-sealing interception. It was his second interception of the season, and it couldn’t have come at a better time.

Rob Wenger has taken plenty of criticism for Minnesota’s special teams over the years, and deservedly so. Saturday, the Gophers’ special teams was largely the difference in a Big Ten road win. They didn’t make any mistakes on kick or punt returns. Mark Crawford had six punts for 308 yards, a 51.3 average, and pinned Purdue inside its own 15-yard line four times. Flipping the field earned Crawford the Big Ten’s Special Team’s Co-Player of the Week Award.

In a downpour most of the day, Matthew Trickett converted both of his extra point attempts, and made both field goal tries. The last, in the heaviest rain of the day, gave the Gophers a 20-13 lead with 1:46 to play.

We saw improvements in Minnesota’s passing game at Purdue, but it was a pretty low bar to get over. Tanner Morgan completed just five passes for 59 yards, and threw two interceptions in the loss to Bowling Green. At Purdue, he hit Chris Autman-Bell for a 32-yard touchdown on their opening drive. Morgan also connected with Michael Brown-Stephens for two deep shots of more than 50 yards. He opened the second half with a 54-yard bomb to Brown-Stephens, which set up the score that put the Gophers ahead for good.

The passing game has been limited with Autman-Bell dealing with injuries, and Dylan Wright not being at Purdue for personal reasons. You can bet the Gophers are using their week off to evaluate how they can get the ball downfield more.

DEFENSE RISES TO THE OCCASION AGAIN

Minnesota’s defense has had an impressive three-game stretch, and the hope is it’s a trend and not a mirage. After allowing 26 points to Miami (Ohio), the Gophers shut out Colorado and allowed just 63 total yards, getting four sacks. They gave up just 14 points to Bowling Green, and Fleck took ownership for seven of them with a fourth down call that failed and put them in bad field position.

Saturday against Purdue, they gave up some yards, but other than a second quarter touchdown, limited the Boilermakers to field goals. Boye Mafe got a strip sack fumble that Minnesota recovered to open the game, one of four sacks on the day for the Gophers. Minnesota also had seven tackles for loss, and got Nubin’s game-sealing interception. Without Mariano Sori-Marin for most of the game, the Gophers limited Purdue to just 77 rushing yards, averaging just 2.3 per attempt.

The Gophers didn’t let the circumstances of bad weather dictate the game, and flew home with a much-needed win. Now, Nebraska awaits on Oct. 16, a game that’s slated for 11 a.m. at Huntington Bank Stadium.