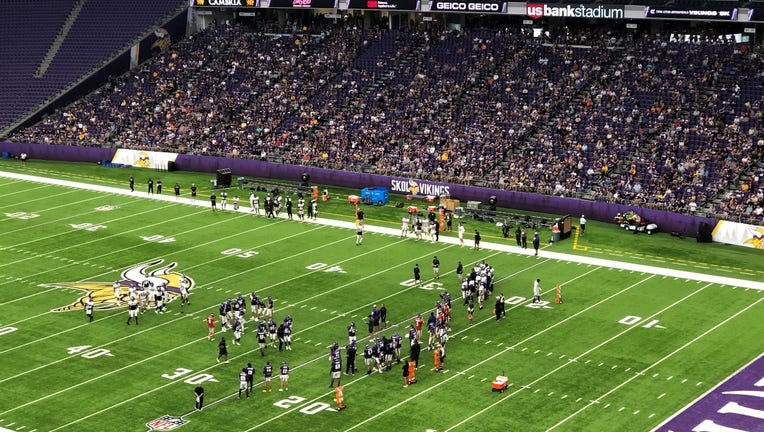 For the first time in nearly two years, fans got inside U.S. Bank Stadium on Saturday to watch the Minnesota Vikings practice.

MINNEAPOLIS - The Minnesota Vikings host the Denver Broncos Saturday afternoon in the first preseason game for both teams at U.S. Bank Stadium, but it certainly won’t have the feel of an exhibition game.

For the first time since Dec. 29, 2019, there will be thousands of football fans inside the home for Vikings football. The team played in front of no fans in 2020 due to the COVID-19 pandemic.

Here are a few storylines to monitor as the Vikings enter the preseason. You can get ready for Saturday’s game by watching Vikings Gameday Live at 1:30 p.m. on Fox 9.

Mike Zimmer made it clear earlier this week that starters will get minimal playing time, if any, in the first preseason game. Kirk Cousins may get one series, but you likely won’t see Dalvin Cook or Justin Jefferson play against the Broncos. Starters who need live reps the most will likely get them in the second preseason game against Indianapolis. It’ll be a big day for Jake Browning, who will get plenty of snaps to try and show he can be the No. 2 quarterback.

The Vikings released a list of players not expected to see the field Saturday about 90 minutes before kickoff, and it was 31 players deep with mostly offensive and defensive starters.

Christian Darrisaw won’t play Saturday after having a "minor procedure" done earlier this week on a core injury. The team still hopes he’ll be ready for Week 1, but that’s a major question mark with a month to go. Rashod Hill got banged up in Thursday’s practice, so he’s unlikely to play. Look for Oli Udoh, Dakota Dozier and others battling for offensive line spots to get significant playing time Saturday.

After having no fans last year, there are no fan limits or restrictions as U.S. Bank Stadium gets ready to unofficially kick off the NFL season. The Vikings had a little more than 5,000 fans at last Saturday’s practice, and there should be thousands more at the first preseason game. Fans in attendance are not required to wear face coverings, but they are encouraged to do so when not eating or drinking, per CDC guidelines. There are also sites outside the stadium for fans wanting to walk-up and get vaccinated for COVID-19. Fans are not required to be vaccinated to attend U.S. Bank Stadium.

We don’t know how much the first-team defense will actually play, but Saturday will provide the first potential look at it. Zimmer said this offseason there could be as many as eight new starters when Week 1 kicks off. Danielle Hunter is back healthy, and Dalvin Tomlinson, Michael Pierce and Sheldon Richardson have been added to the defensive line. There’s a battle for a third linebacker behind Anthony Barr and Eric Kendricks, and the secondary will have a new look with Patrick Peterson, Mackensie Alexander and Bashaud Breeland, and Xavier Woods added at safety.

The Vikings and Broncos kickoff the preseason at 3:05 p.m.