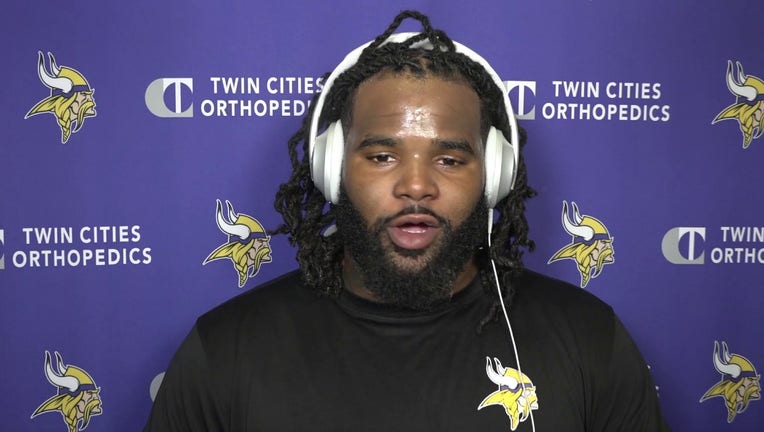 The Vikings continue to revamp their defense for the 2021 season, signing defensive tackle Sheldon Richardson to a 1-year deal as the team started mandatory minicamp on Tuesday.

MINNEAPOLIS - Mike Zimmer must have liked what he saw as the Minnesota Vikings held Day 1 of mandatory minicamp on Tuesday at TCO Performance Center, because their first workout ended nearly 40 minutes early.

In 7-on-7 and 11-on-11 situations, Kirk Cousins, Kellen Mond and Jake Browning all had touchdown throws on their final passes of practice. Cousins’ went to Chad Beebe, Mond hit Shane Zylstra and Browning found Brandon Dillon. Zimmer then had the team huddle before they left the practice fields after about 1 hour, 10 minutes.

It's the beginning of the end for the Vikings' offseason program with the first day of mini-camp underway Tuesday.

In total, 86 of the team’s 90 rostered players were on the field Tuesday. Only Jeff Gladney, Kris Boyd, Tye Smith and Riley Patterson were not spotted.

All the talk going into the first day of mandatory minicamp was about Hunter, who reportedly agreed to a re-worked contract with the Vikings for the 2021 season. In exchange, he showed up to practice after skipping voluntary organized team activities. He mostly stood on the sidelines and watched with a visor on, and the Vikings have yet to officially announce his new contract.

"Everybody’s got their own side of the business side going on, so as a player definitely respect that. Also very happy to have Danielle back, he’s a tough guy to replace. He’s a game-wrecker for us," safety Harrison Smith said. "You want a guy like that in your locker room."

It turns out the Vikings weren’t done. They announced before practice Tuesday they’ve signed defensive tackle Sheldon Richardson to a one-year deal. He played for the Vikings in 2018, then spent the last two years with the Cleveland Browns.

He’s back on a defensive line that now features himself, Hunter, Dalvin Tomlinson, Michael Pierce and whoever wins the other defensive end spot between D.J. Wonnum, Hercules Mata’afa and others. Richardson said Tuesday the Vikings gave him an offer a few weeks ago, and he took it after not being able to reach an agreement with the Browns.

Richardson will provide depth with Tomlinson and Pierce.

Richardson will make $3.6 million in base salary, and could make more with incentives. The last two seasons in Cleveland, he’s recorded a combined 126 tackles, 7.5 sacks and nine tackles for loss. In one season alongside Hunter in 2018, he had 49 tackles, six tackles for loss, 16 quarterback hits and 4.5 sacks.

"Sheldon’s a baller. Obviously the news of Danielle coming back, and I was like ‘Ooooh, we got Sheldon too.’ It was pretty big-time for us," Smith said. "He’s an absolute playmaker and I’m happy he’s back," Smith said.

The Vikings now feature a defense that, when healthy, features Hunter, Tomlinson, Pierce and Richardson on the defensive line. They have one of the best linebacker duos in the NFL in Eric Kendricks and Anthony Barr, and proven NFL stars in the secondary in Patrick Peterson and Smith.

It appears Zimmer’s defense, which he called one of his worst-ever last season, is just that. In the past.

"We have all the pieces. From just looking at practice today, it was kind of competitive during a somewhat jog, 75 percent type of day. The intensity is there, the focus is there, guys want to be better. You can’t beat it," Richardson said.

Richardson, 30 years old and entering his ninth NFL season, is out to prove he’s one of the best defensive tackles in the NFL.

"I still want to be one of the dominant guys in the league, like I’ve been. I’m not looking for popularity, I’m looking to be productive and making sure the guys on the field playing with me and against me respect me," Richardson said. "Simple as that."