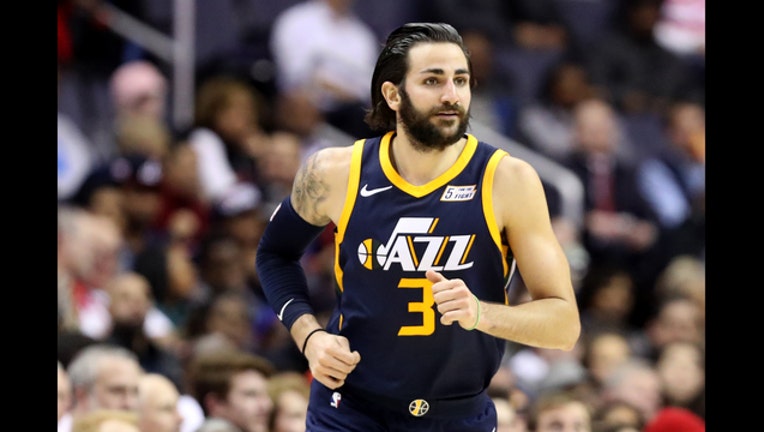 MINNEAPOLIS (AP) - Ricky Rubio scored 23 points, including a season-high 5-for-6 shooting on 3-pointers, and Donovan Mitchell added 21 points as the Utah Jazz beat the Minnesota Timberwolves 121-97 on Sunday night.

Dante Exum had 14 points and Jonas Jerebko scored 13 points to help Utah climb a half-game ahead of Minnesota for sixth in the Western Conference. The loss kept the Timberwolves one game ahead of New Orleans, which lost at home to Oklahoma City.

The Jazz shot a season-high 60.5 percent from the field and got 50 points from their reserves to split the season series with the Wolves by winning the last two games. Utah has won 25 of its past 30 games.

Andrew Wiggins scored 23 points for Minnesota, which had won two straight but fell to 19-5 at home against Western Conference opponents this season. Karl-Anthony Towns had 20 points.

Wiggins was aggressive early in a pivotal game for both teams. He scored 11 of Minnesota's first 15 points and the Wolves held a four-point lead.

Utah recovered and methodically pulled away. The Jazz took their first lead at 22-20 and didn't trail again. Jerebko hit a fall-away shot against Towns to cap a 25-10 run for a 41-30 lead.

Rubio, who was traded from the Wolves in the offseason in part because of his poor shooting, buried his former team further with a run from 3. He was 4 of 4 from long range in the second quarter and had 16 points in the first half.

Utah scored on four of its first five possessions of the second half to pull away and led by as many as 29 points.