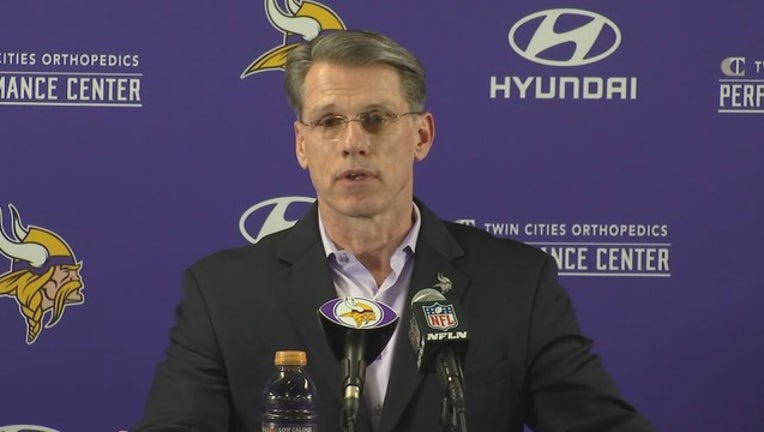 Vikings' General Manager Rick Spielman says change is the only constant at the NFL draft.

MINNEAPOLIS - Rick Spielman was equal parts excited and emotional while having one of the more difficult conversations of his professional career with George Paton earlier this week.

The news became official on Wednesday that after 14 years with the Minnesota Vikings, Paton was leaving the organization to become the next general manager of the Denver Broncos. He signed a six-year contract to be the man in charge of Denver’s front office.

Spielman and Paton have known each other for more than 20 years. Paton spent the last nine years as Spielman’s right-hand man at assistant general manager with the Vikings. In 2018, Paton was named the vice president of player personnel. Roster decisions between the NFL Draft and free agency are ultimately Spielman’s call, but they’re a group decision that had plenty of influence from Paton.

Spielman considers Paton one of his closest friends and like family. Spielman is a godfather to his son, Beau.

"When I came here to Minnesota, it took me a year, but I was not going to give up until I was able to get George Paton up here with me. I’ve been in this business going on my 31st year, and I don’t believe I would be in the position I’m in without having George Paton by my side through everything that we’ve been through," Spielman told reporters on Thursday. "He’s been my sounding board, my closest friend and truly like a brother to me."

Paton has had his opportunities in the past, but ultimately the Broncos were the right fit for him personally and professionally to finally make the move. Paton came to the Vikings in 2007, and since that time, had a say in acquiring 22 Pro Bowl players. Of those, 15 have come through the NFL Draft and totaled 33 Pro Bowl selections.

It leaves a big hole for the Vikings to fill in the front office. So how will they do it?

It’s an area Spielman says will be reassessed after the NFL Draft. In the meantime, he’ll likely rely on Jamaal Stephenson, the director of college scouting, Ryan Monnens and Reed Burkhardt in pro scouting and Rob Brzezenski, the team’s executive vice president for football operations.

One thing that isn’t clear is if Paton will take people from the Vikings’ front office with him to Denver.

What will Spielman miss most about Paton? He says their friendship and synergy. That’ll be the most difficult thing to replace.

"When you work with someone that long, when you know each other so well, you don’t even have to say anything. You just look, he already knows what I’m thinking and it’s that unique synergy that you have with people," Spielman said. "That’s what has made it so smooth over the years that we’ve worked together."