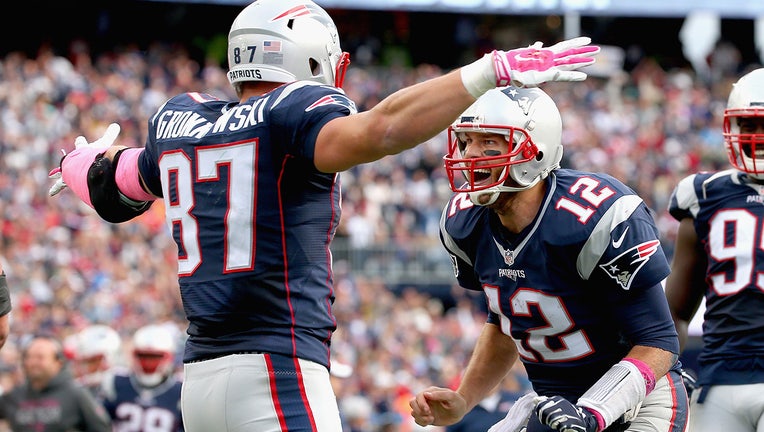 Tom Brady and Rob Gronkowski react after Gronkowski scored a touchdown during the fourth quarter against the New York Jets at Gillette Stadium on October 25, 2015 in Foxboro, Massachusetts. (Photo by Jim Rogash/Getty Images)

MINNEAPOLIS - It appears one of the most successful tight ends in the history of the NFL couldn’t stay out of the game for more than one season.

According to multiple reports, Rob Gronkowski is making a return to professional football. He’s also leaving the New England Patriots to play with an old teammate. Gronkowski is reportedly being traded to the Tampa Bay Buccaneers and will be reunited with Tom Brady, who signed with Tampa Bay in free agency. The Brady to Gronkowski connection has been one of the most successful in the history of the NFL.

The news should have Vikings fans on notice. The NFL has not released the 2020 schedule yet, but the Vikings travel to Tampa Bay this season.

In 2018, Gronkowski had 47 catches for 682 yards and three touchdowns in 13 games with Brady. Gronkowski has 79 career touchdowns and more than 7,800 career receiving yards on 521 catches. He’s a five-time Pro Bowl pick, has been selected First Team All-Pro four times and is a three-time Super Bowl champion, all with Brady.

The Buccaneers got a seventh-round pick along with Gronkowski, while sending the Patriots a fourth-round pick.