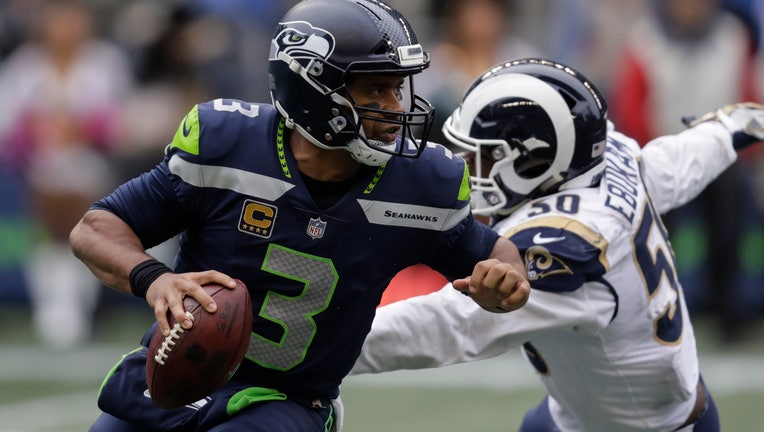 Russell Wilson of the Seattle Seahawks rolls out of the pocket to avoid linebacker Samson Ebukam of the Los Angeles Rams during a game at CenturyLink Field on October 7, 2018 in Seattle, Washington (Photo by Stephen Brashear/Getty Images) (Getty Images)

Every moment is a little bit bigger in primetime. This week, the Los Angeles Rams and Seattle Seahawks renew their NFC West rivalry for Thursday Night Football on FOX.

Leading 33-31 and facing a 4th and inches with 3:28 left on the road in Seattle last season, the Los Angeles Rams brought the punting unit onto the field. But Seahawks head coach Pete Carroll used the team’s final timeout, leaving Rams head coach Sean McVay with a decision: Punt and force the Seahawks to drive for field goal position with no timeouts, or go for the first down to seal the win.

McVay’s offense gave him no choice. They were going for it.

On 4th and inches in their own territory, Los Angeles Rams head coach Sean McVay pulled his punting unit off the field after a Seattle Seahawks timeout. What happened next made rivalry history.

“Initially we talked about punting it,” McVay said after the game. “You look at the belief that they had and how much they wanted to do and because of their belief, it made me feel confident — it made us as a coaching staff feel confident to make that decision.”

Seahawks running back Shaun Alexander ran for three touchdowns in a 31-16 win over the St. Louis Rams on November 13, 2005. His first touchdown that day was his 15th touchdown of the year, making Alexander the first player in NFL history to score 15 touchdowns in five straight seasons.

Do you remember Shaun Alexander's record-setting run against the Rams?

This week, Thursday Night Football is back on FOX as Jared Goff and the Rams take on Russell Wilson and the Seahawks in a huge NFC showdown. It all starts at 7:30 Eastern, 4:30 Pacific on FOX, NFL Network, and streaming on Prime Video.