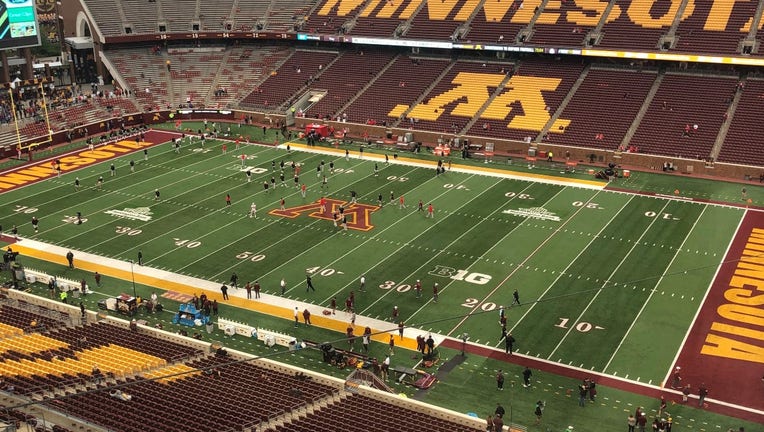 MINNEAPOLIS - A day of celebrating the return of football with fans to Huntington Bank Stadium will commence Thursday night with the University of Minnesota hosting No. 4-ranked Ohio State to open the 2021 season.

The newly-named Huntington Bank Stadium is going from hosting a few hundred fans for games due to COVID-19 restrictions last season to more than 50,000 fans for Gopher Football’s season opener against Ohio State.

You can watch the game on Fox 9 at 7 p.m., and campus was buzzing as the tailgate lots opened at 2 p.m. The team arrived to the stadium shortly after 4:30 p.m. for the first Ski-U-March since Nov. 30, 2019, when the Gophers ended the regular season with a loss to Wisconsin.

A sellout crowd is expected Thursday night for the Gophers’ home opener. Minnesota returns 20 starters from last year’s squad that finished 3-4. There are also more than 30 NFL scouts in attendance for the game.

Gophers' top receiver Chris Autman-Bell will not play Thursday night. Autman-Bell came on the field in full pads for warm-ups, but did the pregame coin toss in sweats and without pads on. He entered the night a game-time decision. He suffered a leg injury during fall camp and has been limited since. PJ Fleck was optimistic earlier this week that Autman-Bell would play against the Buckeyes, but his start to the 2021 season will have to wait.

The Gophers are led offensively by Tanner Morgan and reigning Big Ten Running Back of the Year Mo Ibrahim. The task of the Gophers’ defense, led by Boye Mafe, Nyles Pinckney, Esezi Otomewo, Coney Durr and others is tasked with containing quarterback C.J. Stroud, running back Master Teague and star receiver Chris Olave.

Stay with Fox 9 after the game as we recap Game 1 online and on TV.