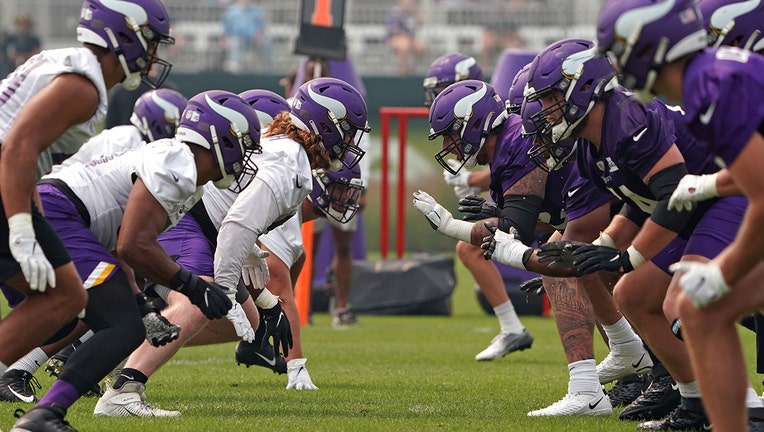 MINNEAPOLIS - The Minnesota Vikings finish their preseason slate at the Kansas City Chiefs Friday night, then the front office and coaching staff have to come together to put the final 53-man roster on paper.

The Vikings have to make roster cuts by the end of business next Tuesday. For some, it’s the realization of a lifelong dream that they’ve made an NFL roster. For others, it’s a move to the practice squad or being released, and waiting for a phone call from another team.

Through about a month of training camp and going into the final preseason game, the roster for Week 1 appears to be taking shape. Here’s a projection of who will make the team:

Kirk Cousins was 5-of-7 for 35 yards in the second preseason game and should play some Friday night. The Vikings’ offensive success hinges on Cousins not getting hurt, and avoiding COVID-19.

If Cousins goes down, it’s a coin-flip between Mond and Browning for who goes in. Both have had up-and-down days at training camp, and Mond missed time on the COVID-19 list.

Oli Udoh has had a great training camp and earned a starting job. The big question centers on Christian Darrisaw, who hasn’t practiced in weeks and has had two offseason core surgeries. Will he be ready to play at all Week 1?

Dalvin Cook won’t play in the preseason, and Alexander Mattison and Kene Nwangwu are nursing injuries. Mattison, when healthy, is the clear No. 2 choice with Abdullah and Nwangwu getting work on special teams.

Is this the breakout year for Irv Smith Jr. with Kyle Rudolph gone? He played in 13 games last year, starting seven, and had 30 catches for 365 yards and five touchdowns. Tyler Conklin has proved to be reliable in the pass and run game, and Brandon Dillon can step in if there’s an injury.

Justin Jefferson won’t see preseason action, and Adam Thielen played one drive. K.J. Osborn emerged in camp as the No. 3 receiver, and Dede Westbrook should provide depth as he comes back from a torn ACL. From a reps standpoint, Osborn appears to be the third receiver behind Jefferson and Thielen.

Danielle Hunter, Dalvin Tomlinson and Michael Pierce should prove to be one of the most formidable defensive line trios in the NFL. Questions remain at right defensive end between D.J. Wonnum and Stephen Weatherly. If Wonnum wins the job, Weatherly, Sheldon Richardson and Everson Griffen will provide quality depth.

Anthony Barr hasn’t practiced since Aug. 5, and his availability for Week 1 is the biggest question on the Vikings’ defense. If he can’t go, Nick Vigil and Troy Dye are next in line. Dye returned an interception for a touchdown against the Colts.

The secondary will have a new look, with free agent signings Patrick Peterson and Bashaud Breeland currently projected to be Week 1 starters. With Jeff Gladney gone and Cam Dantzler struggling in camp, the depth will come from Mackensie Alexander, Kris Boyd, Harrison Hand and Dantzler.

Greg Joseph’s only competition in training camp, Riley Patterson, was cut after an injury. Joseph made both of his field goals against the Broncos, then went 1-for-2 against the Colts. The specialists have been the least talked about position group in training camp, and let’s hope it stays that way.

We’ll see what the Vikings do with the final roster spots after Friday’s preseason game, and leading into Tuesday’s cuts.